I heard the screams of a girl coming from a car that passed by and rounded the bend too quickly for me to see it, but still I stood there, staring down the street, hoping and praying with words that had not yet been formed. It was just a moment later and there she was! She came marching back up passed me and into the darkness of her world that most would never know. No older than 15, I guessed, and with too little fabric to cover her tiny frame and keep her warm in the coolness of the night. The little bump in her belly was naked but that was most likely the least of her troubles.

I followed her, having to run a little to catch up but I called out to her and she stopped. She turned towards me but immediately hung her head to hide her face behind the matted mess of her unkempt wig. I asked her to look up and look at me, desperately hoping that somehow I could reach into her soul, to show compassion and give her at least one moment to feel human, loved and valued. Her pitch-black eyes told the truth of the fear and affliction of a sex-slave but her words were the rehearsed scraps of someone else’s tale. These words are all she is permitted to speak — conditioned by means of repeated violent rape and abuse, compelling her to protect her oppressors.

Nothing is quite as it seems! 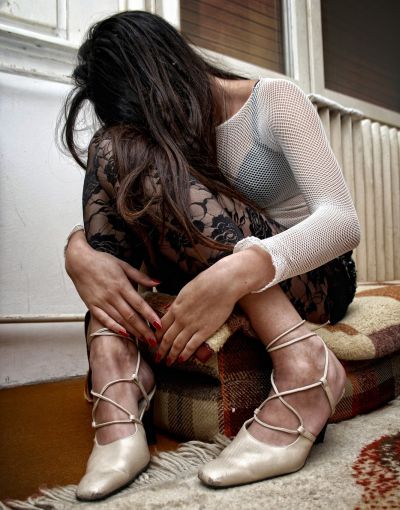 My usual 20-minute drive home that night was stretched to close to an hour, even though there is typically no traffic in the wee hours of the morning. My heart and thoughts were in another world — far, far away — no, not in Taiwan or India or Indonesia or Russia, but with the child I had just met, right here in Port Elizabeth. Yes, human trafficking is very much a reality in PE! This “far, far away” world is not geographically distant, as some might suppose, but is often far from consideration, only for lack of exposure to the truths that hide within this heinous crime. It is my hope that we can change that in the months and years to come.

Many misconceptions
The misconceptions around all forms of modern-day slavery are many and I will write more about these in future articles, but sex-slavery is one that is close to my heart and it certainly deserves attention and understanding.

All too often civil society will look down on sex-workers with disgust, condemning their “career choice”, but what if there was no choice? Though not lacking compassion for these too, I am not referring to the minority of sex-workers who may see no alternative “choice” but to sell their bodies for survival. Instead I would like to draw the readers’ attention to another category of sex-workers who really do not have any choice. Would we still hold in contempt a 12-year-old child who was abducted, beaten, drugged and gang-raped for several months and then forced into prostitution for someone else’s monetary gain? Surely not!

As she ages within the industry — if she even survives past 15 years of age — starting to look a little more like an adult, do we suppose that an “adult” choice was made? What about when she turns 18? Is she suddenly no longer that victim, but now a criminal? Does she suddenly deserve to be arrested or scorned for “her” crime? There is no birthday gift but instead her basic human right (freely available to everyone else) to report sexual violation, or physical assault by a client evading payment, is further destroyed by her fear of arrest. (Please note that according to South African law, every sex-worker under the age of 18 is automatically regarded as a victim, irrespective of circumstances. This includes all forms of sex work: street prostitution, brothel prostitution, escort services, massage parlour-related prostitution, pornography, exotic dancing, nude modelling, sexting, peepshows, child-brides or sexual servitude, etc.)

I do not mean to imply that all who have been trafficked for the purpose of sexual exploitation, would have started out as young girls, but in truth, if not by similar means, equally compelling forces are commonly applied with many adult women, as well as young boys, men, transgenders and transsexuals. The statistics for each may vary in certain parts of the world, due to factors that increase vulnerability, as well as preference (demand) and availability (supply), but truly, nobody is disqualified in the eye of these opportunistic perpetrators.

This brings me to my next question, with deliberate reproach … is there really much difference between one who sells another human being for personal benefit and one who buys a human being for personal benefit? Why is she, the metaphorical “merchandise”, so often rebuked and/or arrested but not the seller, nor the buyer? If there was no demand from clients, there would be no need to supply and no business for traffickers!

I thank God for the opportunity to write on the subject of human trafficking. I pray that through this column, awareness, understanding and compassion would be stirred in the hearts of people, to stand together against the world’s greatest injustice.