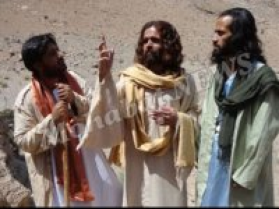 Plain-clothed security officers raided Shahram Ghaedi’s house and arrested him as well as two other Christian converts. All detainees were then transferred to the security ward in Dastgerd Prison in Esfahan. Mr. Ghaedi is a Christian actor who played the role of Jesus in the Iranian “Jesus Film,” reports Mohabat News.

Christian sources from Esfahan reported that the three Christian men arrested on Saturday were Shahram Ghaedi, Heshmat Shafiei, and Emad Haghi. They were transferred to “A-T” (security) ward of Dastgerd Prison in Esfahan immediately after their arrest.

Informed sources indicate that as soon as the security authorities entered Mr. Ghaedi’s residence, they thoroughly searched the house and confiscated some of his belongings, including his books and his computer.

Reports sent to Mohabat News indicate that at least one of the three arrested men had been arrested before. Mr. Ghaedi, a resident of Foolad-Shahr, had been arrested on February 22, 2012, at the same time as Pastor Hekmat Salimi and several other members of St. Paul Church of Esfahan were arrested.

In that incident, Mr. Ghaedi was eventually released on bail after 70 days of detention. However and afterward an Islamic court sentenced him to three months in prison for evangelism.

Shahram Ghaedi, 32, is a theatre actor and a member of St. Paul Church in Esfahan. He has played the role of Jesus in several theatre plays because he resembles the generally popular idea of how Jesus may have looked. He was in the process of making another “Jesus Film”, but the project was disrupted after the government authorities arrested several of the cast members. Some of the cast members were even forced to leave the country due to pressures exerted by the security authorities.

Mr. Ghaedi is a member of Young Artists Association of Foolad-Shahr and has directed a number of plays. One of his plays that he directed and was widely welcomed by audiences in Foolad-Shahr was called “The Last Supper”.

Sourced tell Mohabat News that it is very likely that this arrest is somewhat related to these Christian men’s involvement in the Iranian Jesus Film project. These sources believe that the security authorities had become suspicious that he may be in the process of editing his shots for the Jesus Film.

It is over a year now that President Rouhani has taken office. However, the pressure on Iranian Christians and house-churches does not seem to have been decreased. During this time Christians received heavier sentences and were subjected to harsher arrests. President Rouhani’s slogan in his presidential campaign was “Prudence of Hope”, while in practice his government has proven to be a government of “Threat and Fear” for Christians.