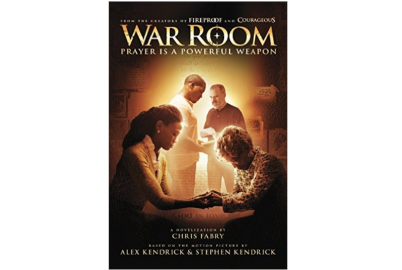 War Room is the novelisation by Chris Fabry  based on the motion picture of the same name. The movie War Room, which has been a resounding box office success since it’s launch in August in the US, is the latest offering from the award-wining creators of Fireproof, Courageous and Facing the Giants, Alex and Stephen Kendrick.

War Room is a compelling drama that explores the power that prayer can have on marriages, parenting, careers, friendships and every other areas of our lives.

Tony and Elizabeth Jordan seem to have it all – great jobs, a beautiful daughter and their dream home. But in fact their lives are deeply marred by a rapidly deteriorating marriage. Tony is wrapped up in his successful career; Elizabeth resigns herself to increasing bitterness.

Taking on the real enemy
Their lives take an unexpected turn when Elizabeth meets Miss Clara, an older widow who has been praying for just such an opportunity to pass on what she has learned about God and prayer from her particular trials. Elizabeth is challenged to fight for her family instead of against her husband, by taking on the real enemy “the thief that comes to steal and destroy”. She learns true intimacy with a loving God and the transforming power of prayer. Her closet becomes her “war room” as she steps out in blind faith to contend for the life she and her family were meant for. Tony’s hidden struggles come to light and he has his own decisions to make.

I found War Room a good read, with the wisdom regarding prayer and a surrendered life sound and insightful. Basic truths come alive in the narrative.

In addition to the novel, various other books have been inspired by the movie. Two of these resources are “The Battle Plan for Prayer” (Stephen and Alex Kendrick) and “Fervent” (Priscilla Shirer), which is specifically for women.

Both these books use Biblical examples and personal testimonies to teach on effective prayer and inspire the reader to a closer walk with a loving Father.  Coaching in personalised prayer strategy leads to greater victory and the knowledge that a  deeper level of intimacy with Him is the greatest reward of all.

The movie, War Room releases in South Africa on November 6, 2015.