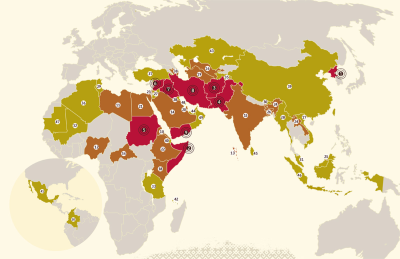 With the publication of its annual World Watch List (2017) of the 50 countries where it is most dangerous to be a Christian, Open Doors has identified five major trends in global persecution.

In some parts of the whole it is the government’s intention and goal to completely wipe out any Christian influence resulting in Christians being harassed; tortured and massacred, says Open Doors.

The major trends discovered during the 2017 WWL research process are:

1. Religious nationalism in Asia is accelerating

Religious nationalism has been gathering pace since the mid-1990s, but there is no doubt that it moved into a higher gear with the landslide election victory of Narendra Modi in India in May 2014.

Eight Christians have been killed for their faith this year alone. As the World Watch persecution analyst for India says: “It’s not only violence. There is a deterioration in freedom in all aspects of Indian society, and Hindu radicals have virtual impunity from the government.”

The Indian Church is massive — 64 million, with perhaps 39 million of them caught up in the vortex of direct persecution.

Buddhist nationalism should not be forgotten either. In Bhutan the government does not regard Christians as Bhutanese at all. A new electronic identity card system ignores parts of the Christian minority, leading to a multitude of discriminations.

2. Asian governments are more insecure, and play the nationalist card

Nationalism is always a card that an insecure government will play. Vietnam has a new government, Malaysia’s leader has been under pressure with corruption allegations and in China President Xi Jinping has been stoking Chinese nationalism even in the realm of religion, claiming that if you must belong to a religion, try a Chinese one like Confucianism – which is clever because it is not actually a religion but a series of moral obligations.

Not a single country in East Asia lost points over the reporting period. In most of these countries, governments say that to be, for example, Sri Lankan is to be Buddhist; to be a Malay is to be Muslim. Christians are always in vulnerable minorities in Asia with the exception of Christian majority Philippines, but even here converts to Christianity in Muslim majority Mindanao are persecuted. It is an easy and common ploy for tottering governments to gain cheap support by scapegoating Christians.

Of course sub-Saharan Africa has been hitting the headlines for years for the vicious antics of its Islamic militant insurgencies such as Al-Shabaab and Boko Haram, the latter accused by the UN in November 2016 of causing Africa’s most urgent emergency with 8 million in danger from starvation as a result of their fight. This still continues. At least a dozen Christians were killed in Somalia this year by Al-Shabaab militants.

But what is not so well known is that Islamic militancy is gaining ground in many more sectors of society. In most of these countries it is not only violence driving the persecution, but all WWL “squeeze categories” (measuring the pressure on Christians in the five realms of private, family, community, church and national life) are showing rising levels of persecution.

It is astonishing that Kenya, a Christian majority country, still remains firmly entrenched in the top 20. Said the persecution analyst for the region: “Extremist violent movements seem to leave behind them a more radicalised people.”

Hausa-Fulani herdsmen in the middle belt region of Nigeria have driven thousands of Christians off their lands.

Somalia is #2 on the WWL because, as a local believer said: “Everything works against the Christian.” All over the Sahel region the situation is worsening for Christians. According to an August 2016 World Watch Research report: “This is a critical time for the future of Christianity in the region … If the instability gets out of control and the militant groups have their way, Christians will be killed and exiled out of the entire region.”

4. The Middle East is polarised between more radical and more autocratic regimes

It is no surprise that with the military pull-back of the USA in the Middle East, two regional powers have moved into the vacuum and both are extremist regimes – Saudi Arabia and Iran. The Saudis are flexing their muscles in Yemen, as they seek to remove the Shia Houthi. The country has become a waste zone, with many Christians caught in the crossfire.

Iran, now that its deal is done with the USA, has arrested record numbers of house church Christians, and many are losing their livelihoods after having to pay huge fines.

Always there is a dual effect of these trends, however. Some Muslims see an ugly face of Islam and convert away from it, leading to a remarkable growth in the so-called BMB (Believer from a Muslim Background) movement, but others become more fundamentalist either out of conviction or merely to blend in.

Sectarian divisions are increasing in many areas. Distinct from these more radical regimes are a group of more autocratic regimes, such as in Syria, Egypt and Algeria, that fight the extremists.

Syria received the military backing of Russia this year. Syrian Christians in government-run areas have in many cases as much freedom as before, and most Christians now have fled rebel held territory.

But even in more peaceful Jordan (#27), where the king seeks to control the extremists, the backlash from his attempts has resulted in higher levels of pressure on Christians.

5. Christians are being killed in more countries than before for their faith

The sad toll of Christians killed has continued in countries where it is sickeningly common, in sub-Saharan Africa in particular – a killing zone for the last decade. But in the WWL 2017 reporting period, the most all-pervasive violence recorded was in Pakistan.

Not only believers from a Muslim Background (who are routinely targeted) but also other Christians found themselves the victims of violence.

In Latin America, where large territories are controlled by mafia or guerrillas, standing up against corruption can be fatal. It is rare to have a reporting period where the killings of Christians have been more geographically dispersed.

Ironically, fewer reports came in of Christians having been killed in Syria and Iraq, as most have already left the territory which Islamic State established as a caliphate in 2014.

How you can be Involved

Open Doors have church representatives throughout South Africa in the different regions that can be invited to speak about the persecuted church in a church setting or in a cell group setting. Open Doors publishes articles in online Christian publications such as Gateway News, and magazines such as Joy and Juig. They have also been interviewed on many community radio stations and will be in Kingfisher and Impact Radio.

If you want to be involved with the work of Open Doors as they serve the persecuted Christians worldwide you can:

1.Pray for the persecuted church. Open Doors have resources that give you daily updates on the prayer needs in different countries.

You get an opportunity to visit and pray with them. To meet with them attend the church service and sometimes to deliver Christian literature. You are part of a group but you need to finance yourself. Open Doors will organise the accommodation”

4. Give financial support to the many projects that they have. You can do that on the website. You can setup a debit order. They have a form on the website that you can fill-in giving to the persecuted church on all the countries. You can say which region you specifically want to support.

Jan Gouws the Executive Director at Open Doors South Africa’s parting words at the recent World Watch List press briefing were: “My request is: this is part of the body of Christ. It’s not Open Doors. It’s the body of Christ that is suffering. We need to make the world take notice of what is happening. That is one of the major reasons the World Watch List goes out. This goes out to politicians. This goes out to the UN. The Christians in South Africa need to know about their brothers and sisters that are being persecuted.