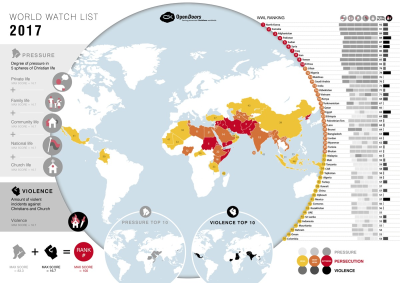 The World Watch List (WWL) — a list of the 50 countries where persecution of Christians is the highest — is a tool given to the Church each year to help us pay particular attention to those countries, to pray for our persecuted brothers and to consider how we can help them, Gateway News heard at a recent media briefing in Johannesburg to release the 2017 WWL.

The list is also given to political bodies and governments around the world to let them know that the Christian voice is strong and will not be silenced, and to make them aware that the body of Christ knows about the horrific acts that some of them are carrying out towards Christians in their countries.

It also confirms that anti-Christian pressure is rising most rapidly in south and southeast Asia.

The rise of the Bharatiya Janata Party to power in India has unleashed a religiously motivated nationalist fervour, according to Open Doors researchers.

Of the six countries whose underlying scores rose most sharply during the past year, five are in south and southeast Asia: India, Bangladesh, Laos, Bhutan and Vietnam.

Another country in the region, Sri Lanka, is a newcomer to the list. Another, Hindu-majority Nepal, did not make the list this year but trends indicate it could join the top 50 in 2018.

Religious nationalism
“A stand-out trend is that religious nationalism is driving the Asian countries up the list. It’s a long-term trend — it’s been gathering pace since the 1990s when nobody bothered to notice it. But this year, I think it’s really comes into its own,” said Dr Ron Boyd-MacMillan, Director for Strategic Research at Open Doors International.

“It is most visible in India. India is at its highest position on the World Watch List ever. The Hindu extremists are really in power, and a mob can do what they like in India, and it’s a large Church so there are a lot of incidents.”

Since the Hindu nationalist BJP won national elections in 2014, the pace of anti-Christian violence has accelerated in the country’s north, where Open Doors estimates as many as 40 million Christians are caught up in the “squeeze” of discrimination and the “smash” of Hindu militants.

Although India is officially secular, the BJP and prime minister Marendra Modi held aloft a vision of economic revival and Hindu purity that filled a vacuum left when voters swept away the ineffective, corrupt government of the Indian National Congress Party.

“Insecure governments of neighbouring countries, themselves majority-Hindu and -Buddhist, have found that appeals to national religious identity are a potent formula to boost their own position of power, especially in rural regions”, Boyd-MacMillan added.

North Korea again ranks #1 on the list. Though it is not the most violent country on the list, Open Doors rates Pyongyang’s dictatorial regime as unmatched in its hostility to religion. Believers are entirely underground and largely disconnected, risking a life of hard labour and death not only for themselves but for their families too, if discovered.

Newcomer to Top 10
Only one country is new to the top 10 in 2017 — Yemen, which ranks 9th after ranking 11th a year earlier. Yemen has been wracked by violence since predominantly Shia Houthi rebels attacked the capital in 2014, prompting the Wahhabist Saudi Arabian government to lead a multinational bombing campaign, effectively turning Yemen into a proxy civil war between Saudi Arabia and Iran.

“Caught in the middle”, Boyd-MacMillan said, “are indigenous Christians, mostly former Muslims who have converted.

“Conversion to another religion is punishable by death. Christians have been actively targeted and killed by militant Sunni Muslims. The war has caused a shift and a sharp rise in persecution, the perpetrators are now mostly the Islamic extremists,” he said.

“The Shia, under the Houthi tribe, are also very intolerant if the religious identity of local Christians is known. So the Christians, if their conversion is known, in this country are getting it from different ends, including Islamic State (IS) and Al-Qaeda — it doesn’t matter who’s in charge.”

Also within the top 10, Somalia moved up four places to #2, and now is just a single point behind North Korea. Though there may be only a few hundred Christian believers in the entire country of 10 million people, the intensely tribal character of Somali society means any Muslim who converts to Christianity is immediately detected and it is enough to get you killed. Somalia is one of only two countries other than North Korea to have been ranked #1 on the World Watch List over the years.

Overall, the top 10 has been stable. Nine of the top 10 on the 2017 list also were among the top 10 on the previous year’s list. Somalia (2), Afghanistan (3), Pakistan (4), Sudan (5), and Iran (8) each rose in the rankings. Syria (6) and Iraq (7) each dropped. In Iraq and Syria there were fewer reported violent incidents as most Christians have fled from IS-held areas, but pressure on Christians is still very high. Yemen’s arrival among the top 10 displaced only Libya, which now is #11.

Other trends among the Top 50
The average score for all 50 countries on the 2017 World Watch List increased slightly compared to the 2016 list. Nearly a quarter of that increase is attributable to eight Middle-East and north African countries – Algeria, Egypt, Iran, Jordan, the Palestinian Territories, Qatar, Turkey and the United Arab Emirates.

“Countries like Egypt, Jordan and Algeria – these are countries that are really cracking down on extremists.”

Extremism has a freer hand in sub-Saharan Africa, where Islamic militancy is going mainstream.

Financial support from outside the region, is flowing to local Islamic politicians and schools, among other elements of society, even in Kenya, the largest Christian-majority country on the World

Open Doors is a ministry that has served Christians persecuted for their belief in Christ for over 60 years. It was founded by Brother Andrew, a Dutch missionary who began his ministry by smuggling Bibles behind the Iron Curtain. Today Open Doors provides spiritual and material support to persecuted Christians in dozens of countries and has development affiliates in over 20 countries.

Researchers survey key contacts in various countries, and those contacts in turn survey their own networks, on the state of religious freedom for Christians in five areas of life: private, family, community, national, and within the Church. These five areas comprise the “squeeze” element of persecution – the daily pressure of official discrimination, hostile attitudes, and family rejection.

Separately, the team measures violence against Christians. This is the “smash” element of persecution, one that often commands headlines but which rarely is the most dominant reality of Christians who live in World Watch List countries.

For each country surveyed, scores for each of the six categories are combined to create a total score. The scores determine the country’s ranking on the World Watch List.

Open Doors’ research methods and results have been independently audited by the International Institute for Religious Freedom and their proper application checked on some sample countries. Additional statements and interpretations by Open Doors based on or associated with the publication of the WWL list remain outside the scope of this audit.

For more information or to set up an interview, e-mail media@opendoors.org.za or phone 011 888 9341. Visit the Open Doors website at www.opendoors.org.za