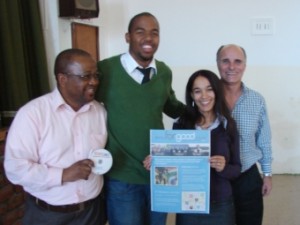 Our ongoing coverage of the e.tv national switchoff campaign was the most viewed topic on Gateway News this week. This story attracted a lot of comments from readers – mostly FOR the campaign. Family Policy Institute director Errol Naidoo who called for the switch-off after e.tv dismissed Christians’ objections to the Naked News programme, reports that a number of churches representing millions of Christians are supporting the campaign. Watch Gateway News for more on this breaking news story, including plans to march on e.tv studios on Cape Town and Johannesburg.

A high-powered team from Heartlines and African Enterprise embarked on a 14-city national roadshow this week to promote the groundbreaking social networking technology, forgood, which they say offers Christians powerful ways of impacting communities and the nation for good! Gateway News was at the PE stop (picture above).

Sunday (May 15) is Internet Evangelism Day, a global day to focus on the awesome evangelism opportunites available in an increasingly online world. A number of Christian publishers are offering free book downloads to mark the event.

With the local authority elections just days away, PE pastor Afrika Mhlophe’s Church and Politics (Part 2) offers an insightful perspective on our responsibilities as voters.

It is three months since Gateway News launched with a vision to provide readers with a regular and reliable source of Christian news, and news from a Christian perspective. What an exciting and inspiring three months it has been! Our passion for the task ahead continues to grow and so does the vision. At this stage we do need a financial boost and so we ask readers who are in a position to do so, to prayerfully consider supporting us.