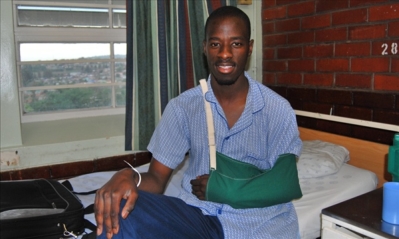 In this week’s news round-up we have a remarkable story about a young Pietermaritzburg evangelist who was seriously injured in a knife attack but went on to lead his attacker to the Lord.

We also carried a report about the UK government threatening to stop providing aid to countries that persecute Christians and homosexuals. 75 per cent of religious persecution in the world is directed against Christians and 40 British Commonwealth counties have laws banning homosexuality.

In other stories we posted in the past week:

– Family values activist Errol Naidoo highlighted public policy issues that respectively threaten religious freedom and provide an opportunity to strengthen the family. He urges Christians to engage with these issues.

– A Port Elizabeth church is releasing “The Sound of Heaven” in an ambitious live CD/DVD recording on Sunday evening featuring, inter alia, a 200 plus voice choir.

– A container kitted with Internet enabled laptops and manned by Christian volunteers, is opening new doors of opportunity for residents of informal settlements in Seaview, PE.

Also in PE, a fortnight after a great show of church unity at a historic metro prayer day, Trevor Jennings of Transformation Christian Network has penned a letter calling on the church to get involved in grassroots issues.

We also have a preview on the Mighty Men Kalahari which starts in Tosca, Kalahari in a week’s time. It’s a tough territory and the people are tough, but organiser  Juan van Tonder believes God will soften the hearts of men who attend.

Finally, please help us in our mission to spread Christian news throughout South Africa. You can do this by encouraging others to sign up to receive this free newsletter, sending us news tips from your area, and by joining our team of voluntary journalists.