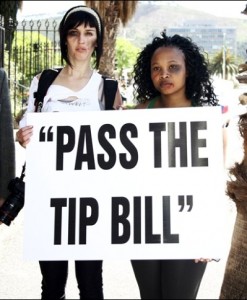 Human trafficking was in the spotlight in Cape Town
this week as protesters outside Parliament urged Government to get a move on with legislation needed to protect vulnerable women and children from slave traders. Protesters in tattered clothes and chains portrayed the physical and sexual abuse that goes with trafficking. Find out what you can do about this evil.

In a related, international article, read an amazing story about a brave US pastor who rescues child slaves from horrific sweat shops and brothels in Central Asia.

Organisers of the historic NMB Metro Prayer Day in the Nelson Mandela Bay Stadium on October 22 were mightily encouraged this week by the testimony of the positive results from a community ‘s prayer days for matrics.

The vibrant Northern Arts Festival in PE has started. We interviewed the festival founder Billy Paulson who is preparing for his next God-inspired project — a community radio station.

A UK lawyer who specialises in defending the rights of Christians is speaking at a conference in Stellenbosch next week. He says that laws in UK are being used to attack Christian values. Fathers of the modern worship movement Brian Doerksen and Graham Kendrick will also perform at the conference. Doerksen will also perform in Johannesburg on October 4.

Tensions over Palestine’s proposed UN membership bid today (Friday, September 23) have also raised tensions in the Middle East and the US.

We will be on Kingfisher FM as usual at 12noon on Sunday with another Christian News roundup.