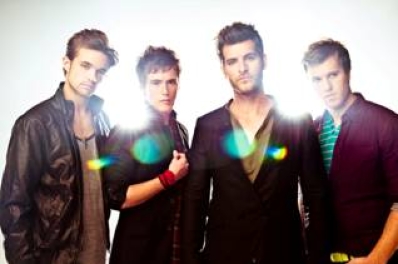 With soaring vocals and hearts bent on ministry, Anthem Lights is set to release its infectiously melodic self-titled debut, released by Provident’s Reunion Records, in South Africa on June 14.

In the USA, Johnny Stone, Program Director for Star99 in New York, says, “The first time I heard Anthem Lights and ‘I Wanna Know You Like That’ I knew I was listening to a top 5, if not a No.1 hit!”

Although the four extremely gifted vocalists did attend Liberty University at different intervals between 2003 and 2009, they didn’t all meet on campus. Instead, Anthem Lights can trace the group’s formation back to the autumn of 2007, when singer/songwriter Alan Powell joined forces with then aspiring solo artist Chad Graham. Both were living in Los Angeles to pen songs for Graham’s solo effort. But providentially, it became clear that these powerful, harmonic songs were meant for a group. Within a matter of days, the pieces fell into place, when LU students—Caleb Grimm and Kyle Kupecky—came on board.

Produced by Juan Otero and Seth Moseley, known as The Write Brothers (Newsboys, Me in Motion), and Rob Hawkins (Fireflight, Chasen), Anthem Lights’ 10-song debut carries a message of hope and purpose for believers and non-believers alike.

Powell notes, “We were intentional on being more than just another pop group. We understood our calling – – that we were meant to be more than ‘music business.’ We were called to share the Light we’ve been given. To build people up. To lead the way.”

Kupecky adds, “It comes down to the three things we love: music, entertainment, and Jesus… And the greatest of these is Jesus. We’re here to help people know who Jesus is and connect on a deeper level with Him. For those who don’t know Him, we want to make that introduction, to say ‘your life has a bigger purpose.’ There are such hedonistic messages in our culture—from music, movies and TV—‘if it feels good, do it,’ but we want to give them something that speaks to their soul, to encourage them and support them as they grow up in Christ. And for believers, we just really want to start a fire in them.”

With a wealth of songwriting talent and an arsenal of musical influences including dcTalk, Michael Jackson, One Republic, Stevie Wonder, Gavin DeGraw, tobyMac, and Justin Timberlake, Anthem Lights has fashioned a dramatic pop experience that is all their own.

Powell says of the band’s sonic approach, “We wanted it to sound big, textured, layered, to give you that feeling of being swept away, and to really connect with pop music fans. But we wanted it to have an edge too. Live instrumentation is important to us as a group, so we wanted to keep that authenticity and accessibility… incredible keys, real guitars and real drums. With those barometers, we were confident in our producers and their great musical sensibilities.”

Currently, Anthem Lights is performing with MercyMe, Jars of Clay, The Afters, Matt Maher and others on the “Rock & Worship Roadshow Tour,” in the USA.

You can find out more about Anthem Lights at www.anthemlights.com and www.facebook.com/AnthemLights and by viewing the video below: