I have just attended the 10 year anniversary celebration of a church that is located amidst the Eastern Cape provincial government buildings at Bhisho. Simply named ‘Community Church’ this strategically located church sees its mandate as that of influencing matters of governance and socio-economic transformation. This church was started by Pastor Mangaliso Matshobane who left a thriving ministry in Port Elizabeth and was part of other initiatives. 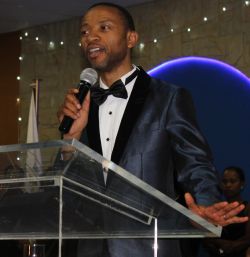 Pastor Matshobane believes that the Holy Spirit led him to plant Community Church under a vision that is based on the second part of Revelation chapter 11 verse 15. It reads, “…The kingdoms of this world have become the kingdoms of our Lord and of His Christ, and He shall reign forever and ever.” Members of the church take this mandate seriously and have set up different “desks” aligned to different government departments.

Police Desk
These desks focus on partnering with the relevant government departments in order to help with service delivery. For instance since 2008 their ‘Police Desk’ has been in partnership with the South African Police Service (SAPS) in an effort to fight crime in the King William’s Town area. The then Deputy Minister of Police, Fikile Mbabula visited the church in 2009 to endorse the partnership between the church and SAPS.

Members of the church regularly conduct prayers at Police provincial headquarters and other police stations. The ‘Education Desk’ has facilitated the adoption of some local schools where educational and material support is given to them by the church. Every year the church sponsors needy pupils with school uniforms. The church also has a scout group that is run by a wheelchair-bound member who travels around the province to train and establish other scout groups.

Working closely with Scouts SA the group set themselves a target of training 600 scouts in this current year and they have already achieved this goal. Children were taken out on camps and trained under the theme ‘Duty to God and Country’ and received lessons on biodiversity and environmental sustainability. The reason this church gets into such activities is because it believes it is called to change its community.

In fact its motto is ‘A Church with a Heart For Its Community’ and this is displayed outside the church’s building. Speaking of a building, the building they currently occupy used to be supermarket store that served the then Ciskei and it was in such a dilapidated state when they purchased it. The building is now a beautiful structure that sees hundreds of people worshipping the Lord every week. Worshippers include many people who work for various government departments.

Because of its location the church hosts a lunch time prayer meeting that targets those who work within the government precinct area. Prayer is a big issue in this church and this partly due to the influence of Laurette  Mkati, a Scottish missionary who joined the church right from its inception. Laurette is an intercessor who coordinates various prayer initiatives around the province and country.

The highlight of the church’s anniversary celebration was a gala dinner that featured an awards ceremony for top performing ministry departments within the church. Gospel musicians Ntokozo and Nqubeko Mbatha rendered some musical items and Apostle Thamo Naidoo spoke about the importance of Community Church using the Scriptures as their foundation as they build for the future. He lamented the lack of Scriptural depth that characterises the Lord’s church today.