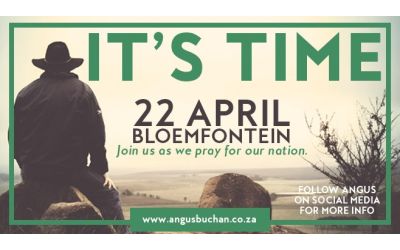 Farmers near Bloemfontein have made land available for camping for multitudes of people expected to attend the ‘It’s Time’ national day of prayer on Wilde Als farm 4km outside the city on April 22.

Camping tickets costing from R100 to R150 per person — and free parking tickets — can be booked online at https://itickets.co.za/events/378763.html

Farmer evangelist Angus Buchan who called the prayer day and is believing God for more than a million South Africans to attend, said it would normally take his team two years to organise such a big event but they had only a few weeks to pull it off.

Addressing a press conference in Pretoria on Wednesday — one of several media briefings he gave this week — he said he had heard the Lord very clearly telling him to arrange such an event and felt that it was urgent to organise it as soon as possible because of the critical state of the nation.

He appealed to Christians throughout South Africa to come together in Bloemfontein to pray against corruption, violence, racism and social ills that were on the increase in South Africa.

The prayer event will be from 10am to 4pm. Buchan is expected to address the gathering from 12 noon. Available accommodation in Bloemfontein is expected to be snapped up fast and hence tent and caravan stands have been arranged on nearby farms.

Camping guidelines
According to an announcement on Buchan’s facebook page, the camp sites will only be available from Friday to Sunday — only to people with camping tickets. The announcement says campers should bring camping and sleeping equipment, their own showering facilities, portable/camping toilets, plastic refuse bags which should be taken with them when they leave, drinking and washing water, and medical supplies. The notice says hunting and off-roading is not allowed, trailers and caravans may not be brought to the prayer event grounds but should be left at the camp grounds until after the event.

Buchan told the press conference that at the prayer venue itself, only toilet facilities will be provided. One thousand toilets were needed and 700 had already been donated. Prayers would have to bring their own food and water and camp chairs or blankets.

“Everyone will have the opportunity to pray individually to God for this country, for our president, for the cabinet, for the nation, for the young people, for immorality, for violence, hunger –everything.

He said there would be no charge for the event and no collection would be taken. The projected cost of the event was R15-million.

Buchan said there would be no live-streaming of the prayer day.

“God gave us a directive to come and pray together. We can all pray in our houses. God said ‘Come together in one place, in one time.’ The point is, God is calling His people.”

Transport plans
Speaking about transport plans, Buchan said trains would be coming from Cape Town to Bloemfontein. Some were expected to arrive on April 19.

Around 380 000 cars were expected to be parked in designated parking areas. The South African Police Service would guard the prayer venue.

Appealing to South African Christians to be part of potentially the largest prayer day in South African history, Buchan said there would not be any international speakers or musicians. A local group would lead the worship.

“It [The It’s Time prayer day] is for all people. All denominations! All creeds! All colours! All ages! All genders. It is for everyone.

“When we stand up as one people, God will change the paradigm and the dimensions of this country.” Buchan said.

Referring to horrific murders that were taking place — not only amongst white farmers but amongst black farmers and black and white citizens — he said it was time that Christians took a stand.

“If God can bring rain, God can also stop the violence, but there needs to be a change of heart especially amongst believers. Only Jesus Christ can save this nation and He will save it if people call on Him,” Buchan said.

‘Last chance’
He said he really believed the national prayer gathering was the last chance to bring normality back to South Africa. He urged people to cancel all their meetings and engagements on Saturday April 22 and to travel to Bloemfontein to pray together.