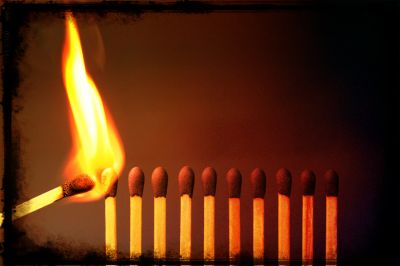 Church leader, author and radio and television personality Gary Kieswetter reflects on revival in this article written for Gateway News in the light of what God is doing in South Africa in this season.

Also see It’s time for a mighty revival in SA

Revival is necessary because as the church, we so easily get bogged down and satisfied with traditions and religion. We need revival because the world needs to experience God as a good Father, full of mercy and grace. God has so often been misrepresented.

Revival is God’s idea to partner with His church and to exalt His son Jesus Christ so that all men may be drawn to Him. It is so easy to become powerless in our mandate to establish His Kingdom on earth. There is no life without the presence of the Holy Spirit. Revival is the re-awakening of the cry of the heart for intimacy with Jesus. This is what Satan fears the most, for he has no answer for intimacy with God. A fresh outpouring of the Holy Spirit on the dry and weary souls of mankind who have been caught up in a religion instead of daily living in a relationship with the living God.

God never intended revival to stop; it was to be passed on from generation to generation.

Re-open and rename the wells
In Genesis 26 God instructs Isaac to re-open and rename all the wells that Abraham his father had dug. The reason for this is that the Philistines filled up all the wells with sand thereby denying anyone the life-giving water. The Philistines represent religion that denies the Holy Spirit to have free access and movement in churches. God wants us to reopen the wells that through decades have been stopped.

God never intended revival to stop; it was to be passed on from generation to generation.

For long the church has been in a spiritual wilderness of dryness desperately needing a fresh outpouring of the presence of God. Notice how Jesus went to Samaria, sat at the well waiting for the woman to come draw water.

This picture represents the Church coming to Jesus who wants to give us the Holy Spirit to quench our thirst. Jesus asked her the question that she should have asked Him, give me a drink of water. When she said, we have nothing in common, Jesus replied, if you knew the gift of God and who it is that is speaking to you, you would have asked Him and He would have given you living water. For He who believes in Me, as the scripture says, the water that I give him will become in Him a well springing up into eternal life. This is the result of being filled with the Holy Spirit. This well and invitation to drink of this living water is still available for us today.

Throughout the years there have been many prophesies that have said that revival will break out in Cape Town and spread throughout our country and beyond our borders — a revival that has not yet been seen.

However, God is busy re-opening all the wells that through the decades have been dug in Cape Town. This is the desire of His heart for humanity to experience God as the good, gracious, generous God that He is. This revival will by far be dwarfed by the reformation that will take place. God will establish His kingdom in our country like never before. God determines the moment of visitation and the church determines how long He stays. Jesus taught us to pray, Your Kingdom come, Your will be done on earth as it is in heaven.

As the Church, we have the honour and privilege of hosting His presence that will cause multitudes in our country to turn to Him. This movement will establish many monuments that will continually give momentum for this reformation to take place.

Celebrate the past but live new revival in the present
In 2010 the Dutch Reformed Church celebrated the revival that God brought through Andrew Murray 150 years ago that swept across the Cape in 1860. As the church we should celebrate the past but be inspired to relive it in the present. Habakkuk 3:2 says: Lord I have heard of your reports, I stand in awe of your works O Lord, revive them in our day, in our time make them known. In wrath remember mercy. Even before this revival broke out Andrew Murray’s father prayed for 36 years every Friday crying out for a move of God.

My own father-in-law Dr James le Roux had the same heart-cry for revival in Parow, Cape Town in the 1970’s. I remember that this church was so packed even with many standing outside just to hear what God was doing. Every week there were many salvations coupled with many healings and miracles, even creative ones. God’s presence was so strong sometimes that people couldn’t stand and it was not unusual to see people lying on the floor crying out in repentance.

There is a hunger in our nation for God like never before.

In 1989 we as a family were called to full time ministry. We were invited to join a team led by PD le Roux, a retired pastor who started “Woord in Aksie” camps in Pretoria. Up to 400 men came every weekend from all over the country driven by their longing to encounter and experience God in a fresh way. This continued for years. They would go back to their towns and churches with a re-ignited passion for Jesus and often started meetings in their own towns. This was a powerful move of God during that time.

In 1990 we were invited to preach in a Dutch Reformed Church in Kibler Park in Johannesburg. The preacher Dieter Berner had a burning passion to see revival in his church. Every Sunday evening we would witness the Spirit move and touch many people. Healing, miracles and restoration of relationships was the norm. There were people falling under the power of the Spirit and filled with joy and laughter.

We then travelled the nation for 22 years preaching everywhere and seeing God doing wonderful things. My wife and I simply desired to be fire starters and rekindle people’s passion for God. In 2011 we started a church in Tygervalley in Willowbridge Shopping Centre.

God told my wife to name the church “Die Bron”, The Well in English. When I asked God what does Die Bron stand for, He spoke in my spirit and said: Bring Revival On Now.

This was our heart cry to God to bring revival and for us to host His presence but we also experienced that this was God’s request towards the church. The scripture says, deep calls unto deep so from the depth of our heart we cried to God and from the depth of the desire of His heart He cries out to all churches: Bring revival on now! God is waiting for us to respond to His purpose for the church. He has given us everything necessary to accomplish His will. His life, His Spirit, His power, His gifts, His fruit, His anointing for us to use to establish His Kingdom on earth.

A hunger in our nation for God
I think of Angus Buchan, a farmer in Natal who has been called and anointed by God for such a time as this. To think that 240 men came to his farm for the first Mighty Men gathering. This began to gain momentum in the country as men began to be re-awakened to encounter God in a living way. There is a hunger in our nation for God like never before.

This hunger has reached the point of contagiousness as seen in Bloemfontein in 2017. This was the largest gathering of believers crying out to God in prayer for our nation in the history of our country with one million people attending.

The re-opened wells are starting to flow with living water, so whoever is thirsty, let him come and drink.

On March 24 2018 Angus Buchan held another prayer meeting in Mitchells Plain, Cape Town with up to 150 000 people attending. This was the largest recorded gathering of people in this region. This was historical and I believe a pivotal moment in this region that has begun to release shock waves that are to trigger the coming tsunami of revival.

This year there are 20 Mighty Men gatherings all over our country. You may ask, what is the significance of this? Remember the two dreams that Pharaoh had and no-one in Egypt could interpret it? Joseph was summoned to appear before Pharaoh for it was known that the Spirit of God was in Joseph. He told Pharaoh the reason you had two dreams and so soon after each other means the following, it is fixed in heaven and soon to come to pass. Whenever God begins to repeat the same thing more frequently we see a pattern established that the glory is about to fall.

The answer is an overwhelming yes. God is setting His church up for a visitation of His Spirit. God is giving us an invitation to embrace this move of God and to partner with Him by praying, Your Kingdom come, Your will be done on earth as it is in heaven. We are about to witness multitudes of people coming into His Kingdom and a display of His goodness, mercy and grace through signs, wonders and miracles.

The re-opened wells are starting to flow with living water, so whoever is thirsty, let him come and drink.