What will our vote mean to our children?

This past Sunday South Africa celebrated 20 years of freedom. It is indeed a huge milestone for our young democracy. Those who were part of the apartheid South Africa know full well the legacy of April 27, 1994. As a family we celebrated this day in Maputo Mozambique. On our way back from Bilene to Maputo in the car we began to talk about the history of our country with our 10 year old son. It was not just him at the back, it was all three of the kids but because he is older, because he knows a little bit about our history and also because we were travelling on Freedom Day we began to talk about the fact that we were in a foreign country.  His father and I shared with him what that meant and how special that was that we were free to go and be in a foreign country whereas multitudes of people in years gone by were not as free. They had to flee South Africa in inhuman conditions. They had to flee and sacrifice their lives; their marriages and their families and here we were as a family we just experienced this wonderful time in Bilene holidaying. Their days in places like Mozambique were anything but a holiday.

I am thrown back to thinking how my life has panned out during the last 20 years.  I thought about the fact that my husband and I are together with our children as a family.  So many families in years gone by were not afforded that freedom!! The gift of enjoying your life as mom and dad with your children was not there. I am forced to think of so many families who lost out on having a father in the family because the father had to work away in the mines. I am forced to think of my own family where my father was forced to work away from home at a hospital hours away leaving my mother to take care of us alone. He only came back every other week. We were fortunate as a family to have that arrangement when so many other families only saw dad once a year in December when he came for a few days during Christmas.

A lot of memories come back as I think of the state of family back then as I am forced to think of the state of family in our modern day South Africa. I think about how in the mid-eighties I was raised by my godmother in the Loerie area and attended a farm school because it was unsafe for me to attend school in the township of Zwide where there was a threat of being attacked at any moment of the day or night. Hippos [armoured vehicles] were a common sight those days. The smell of teargas was a familiar smell, the same way that the smell of coal is a familiar smell in the evenings in most of our townships these days. Seeing a hippo was as common as a seeing  a local bus except it brought tremendous terror as you did not know who was going to lose their life; who was going to be raped by the soldiers and if we were going to have to flee from teargas.

Teargas
The sight of hippos and smell of teargas ruined a “peaceful existence” in our neighbourhoods.  I remember one time it was a Saturday afternoon and my family was outside enjoying the sun and just talking. My grandmother had come to visit from Alice and we were just having a wonderful time outside bonding as a family. The comrades were coming back from a funeral. They were going past our home when hippos just came from nowhere and started throwing teargas. Because they were toyitoying in front of my home and because we were staying in front of a school the only way they could run away from the threat of being shot at and from smelling teargas was to our house and the neighbouring houses. A flood of people came running through the gates of my home and we all ran inside the house as we were running away from the smell of teargas. I remember some comrades lifting up my grandmother to help her flee. They ran with her to the house where everyone was trying to find water to drink. This is a very vivid memory of some of the things that one went through; some of my experiences of those dark days in our history.

I cannot help but think back as we are about to cast our vote. We are literally a week away from Election Day on this our 20th year of freedom.

I was too young to vote in our first democratic election in 1994. I was in Matric (grade 12) and I didn’t understand the full magnitude of that moment. The morning of 27 April 1994, my parents woke up really early to join the already long queue of voters who gathered in the nearby school. I didn’t fully comprehend the significance of that one act of casting one’s vote but I so understand it now. It brings dignity; it says we see you!  We acknowledge you!! We honour your voice. It is a tremendous responsibility that we get given, may we use it knowing full well that it affects who we are. It affects our lives and those of our children; our families. 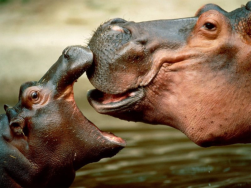 I ASKED MY TEN YEAR OLD BOY IF HE HAS EVER HEARD OF TEARGAS AND HE SAID NO!! I thank God for that. I love the fact that when I say hippo he only sees an animal in his mind!!!!!!!

Anthem
When we touched South African soil from our trip in Mozambique Unida my 7yr old daughter began to sing the national anthem. Her two brothers, Jedy (10) and Ntando  (4)  joined her singing it. Of course my husband and I laughed at this as it was the last thing we expected the kids to do. Unida said it is great to be back home. At 7 years she understands that South Africa is her home. As their singing died down I was left with my thoughts of what the kids had just done singing the anthem. We might sing the national anthem now and again and take it for granted but it holds such precious truths:

As I cast my vote on May 7th I will be thinking of my 10 year old son who thankfully has no understanding of what teargas smells like; of how a hippo looks and who has never known the term ‘necklace’. I will be thinking about the love my 7 year old daughter has for her country. I am humbled that even at this young age she appreciates and loves her home country. I will be thinking about my very adventurous carefree 4 year old little boy who is so full of life and loves enjoying and exploring — these precious lives will be at the forefront of my decision when I cast my vote on May 7. What kind of life do I want for them? What kind of country do I want for them? Do I want them to know violence and a threat of death at every turn or do I want to uphold the ideals of peace of 1994?

The legacy that I want them to live and which I want to leave as a parent is that my children will never go through some of the things that we went through!! Our children born after 1994 are called the bornfrees!! We still have so much to do to ensure that they truly do enjoy the benefits of freedom. There are different challenges that threaten the very fibre of who we are as a nation; poverty;  unemployment; crime; xenophobia; drugs; teen pregnancy; AIDS.

It is up to you and me to think about our responsibility this coming week!

This is a conversation I had with my 7 year old daughter Unida recently:

Neziswa: Why do you love South Africa so much?

Unida:  (She laughs) ,“Why do I like South Africa so much because it is my hometown and its where I was born in!”

Neziswa: Ok! We were away from our home country. It is not a town. It is a country. The first thing you did when we got back was to sing the national anthem why did you do that?

Unida: Because I love my home country and I want to bless God for giving me the home country so I can remember it because it.

Neziswa: What do you love most about South Africa?

Unida: My house and my family!

Unida: It is a nice house. I love my brothers Jedy and Ntando; mama and daddy.

Neziswa: South Africa celebrated 20 years of freedom three days ago. What do you think freedom means?

Neziswa: Life? What about life?

To our children life is about enjoying the “simple things” of having a home and a family. They might not be old enough to vote but they love this country as much as we do. Let us vote with them in mind!! Let us vote for our families and for the greater family of South Africa!!