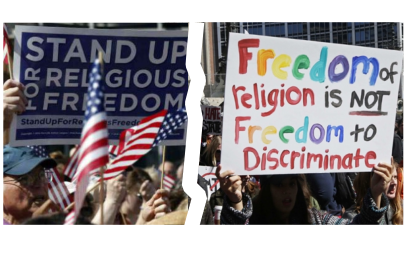 [notice] A special report by attorney, Nikki Venter, written on behalf of Freedom of Religion South Africa (FORSA)[/notice]
There is a rising legal challenge that will soon reach the courts in many western countries, if it has not already.

CNSMonitor.com summed it up nicely: “As more and more same-sex couples across the country [USA] legally celebrate their nuptials with traditional public pomp and ceremony, the cherished right of freedom of religion has run headlong into the principle of non-discrimination in the public sphere. As a result, a vexing national debate has begun to rage over the extent and legal limits of each side’s visions for the nation’s common life together.”

The ultimate question when this debate reaches its crescendo is going to be “Which right should trump which and when?”

When these cases begin to hit the courts, the courts are going to have to distinguish between two questions. These questions are often blurred by the liberal media (perhaps intentionally so) and this has in the past created a public outcry where the public has drawn its conclusions without being clear on what the questions are.

The two questions the courts in SA are more than likely going to have to decide on in the future are as follows:

Should a business be entitled to deny services to a group of people referred to in Section 9 of the Constitution based solely on the fact that the people being denied service belong to that particular group — and use the right to freedom of religion as their justification?

Should a business be compelled by the State to be a party to (or help facilitate) an event (or an action) that goes against the religious convictions and the right to freedom of conscience of the business owners?

When looking at any case, the courts are going to have to first work out on the facts whether they are considering Question 1 or Question 2, before they consider the outcome.

In order to work out which question they are looking at, they’re going to have to ask:

1. Is the business owner denying the supply of goods/services solely in relation to an event or action?

2. Would / Does the business owner serve members of the group in question during the ordinary course of business if their request was not in relation to that particular event or action?

In other words, the courts are going to have to first determine if the business is saying no because of the PERSON or because of the EVENT or ACTION being catered for.

The definition of an “accomplice” is a person who knowingly helps another person commit a wrongdoing.  The law recognises that by helping someone commit a wrongdoing, you should also be held guilty even though you did not commit that wrongdoing yourself. Therefore, it is not a stretch of the imagination to acknowledge that many people believe that by helping or facilitating someone in their committing of what that person believes to be a sin, they are an accomplice to the committing of that sin and thereby sinning themselves.

The courts are going to have to decide whether there should be space in the law to allow people the freedom of conscience not to be a facilitator (or complicit) in an event or action which they deem to be wrong.

Here are a few examples of where the court will be dealing with Question 1:

1. Should the local grocer be allowed to say “We will sell our goods to anyone, but not black people?”

2. Should a restaurant be allowed to say “We will serve anyone, but not gay people?”

3. Should a florist be entitled to say “I don’t serve men. Only women.”

Here are a few examples of where the court will be dealing with Question 2:

1. Dog fights – “We would like to rent your venue for our annual dog fight competition where approximately six dogs are torn limb from limb every year” – Should the venue owner be entitled to say: “No, I know that dog fights are legal but in my opinion, they are morally wrong and therefore I do not want my venue to host that?”

2. KKK meeting – “We would like to hire your venue for our annual KKK meeting” — Should the venue owner be entitled to say: “No, I know that you have the right to freedom of association and that your meeting is not illegal but I believe that what you stand for is morally wrong and therefore do not want my venue to host that?”

3. Celebration of Abortion cake: “We are having a party celebrating Roe vs Wade, the court case which made abortion legal, and we would like you to please make a cake with the words ‘Celebrating the right to abort.” — To many, the killing of the unborn is tantamount to murdering a baby and therefore being forced to be a part of celebrating it would be unconscionable to them — Should the business owner be entitled to say: “No, I know that you have the right to celebrate anything you like but I am against abortion and therefore cannot in good conscience supply a cake with that message written on it.”

Do you see that the difference between Question 1 and Question 2 is that Question 1 is based on the person being part of a particular group referred to in section 9 of the Constitution, and is not related to any event.

Question 2 is not about the person at all, but about the event or action.

Question 1 invokes (amongst other things) the application of section 9* of the Bill of Rights, but Question 2 invokes section 15.1* of the Bill of Rights (the right to freedom of religion and conscience) as the action is based solely on the business’s participation in a particular event or action.

Section 9 protects people from being discriminated against by the State or by other people on grounds of inter alia their sexual orientation, religion, conscience, belief, etc. So section 9 is a very wide-reaching right for all groups not to be discriminated against. When more than one right in the Constitution is pitted against each other (as often happens), the courts must weigh them both within the context of the limitations clause and try their best to keep both rights intact as far as possible.

The media has incorrectly fudged the two questions referred to in this article into one and thereby confused many people as to what the legal issues are.

The courts are not going to be entitled to (nor will they) fudge these two questions because there is a vast difference between saying “I won’t serve you because you are part of group X” and “I will serve you anytime, I just cannot be a party to that particular event or action because that event/action goes against my conscience.”

*Section 15.1 “Everyone has the right to freedom of conscience, religion, thought, belief and opinion.”