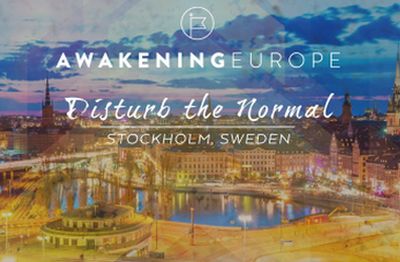 [notice]It is common to hear Europe referred to as post-Christian and under threat of Islamisation. And so it is refreshing to hear about a major gospel wave that will be rolling across Scandinavia this weekend — building on an earlier wave of life that was started in Germany last year. South Africans can follow the action via GOD TV.[/notice]

Thousands of Christians are travelling to Stockholm this weekend for Awakening Europe, a mass gathering at the Friends Arena and GOD TV will air it live worldwide. Several sessions from the event will be aired from October 28 to 30 2016 capturing the excitement of the crowd, music from top Gospel artists and messages from leading speakers.

‘Disturb the normal’
Awakening Europe in Stockholm follows a large-scale stadium event in Nuremberg, Germany last year where many thousands gathered to be part of a spiritual rekindling in Europe. This year’s theme is ‘Disturb the normal’ and aims to build a new ‘Jesus People’ Movement that will impact the nations for the Kingdom of God.

GOD TV Founder, Wendy Alec will present a half-hour pre show live from Stockholm on each of the three days, to mobilise GOD TV’s viewers to pray for the upcoming event, with interviews with some of the guest speakers.

“Scandinavia is an ignition key for the evangelisation of Europe,” said Wendy Alec. “Nuremberg was the beginning of something significant, that is going to happen in Scandinavia and overflow into Russia, Switzerland, and France and across the English Channel to the UK.”

Co-operation with other Christian Networks
In an unprecedented move, GOD TV is making the live programmes available to three other Christian networks to enable many more viewers across Scandinavia to watch. Local networks Kanal 10, Visjon Norge/Sverige, and TV7plus will all carry GOD TV’s live broadcasts of Awakening Europe, Scandinavia from October 28 to 30 2016, saturating the Nordic countries with the gospel.

“It’s a privilege for us to join with other Christian broadcasters so more lives can be impacted by this major event,” said GOD TV President and CEO, Ward Simpson. “We are stepping into a new season of unity in the Body of Christ and unity brings God’s blessing.”

The vision behind Awakening Europe
GODfest Ministries  shares on its website the vision behind Awakening Europe and the connection with the awakening that happened in Wales between 1904 and 1905.  The stirrings for the Wales awakening started in part with Evan Roberts who “at the young age of 15 … would spend sometimes three or four nights a week praying for a minimum of an hour at a time that his nation Wales would turn back to God. It didn’t take God long to hear him as only 10 years later, as the nation seemed to be in its darkest hour of sin and where churches were the most empty, God released an Awakening that rivalled the time when He visited the city of Nineveh. In less than three months there was a nationwide repentance where almost half of the country’s population was swept into the kingdom of God.”

Over two years of travelling through Finland, Sweden, Norway, Denmark and Iceland a “deep heart and love” for the countries grew, says GODfest. Often the people in these countries are described as “hard to reach” or “not wanting to hear about Jesus”.

The vision statement continues: “God is searching for a person, a group of people, a hungry heart that is tired of the daily normal of life and no longer can tolerate demons taking their family and friends away from God. God is looking for someone who wants to see Jesus “Disturb the Normal” and release a huge wave of life back to your nation…”

“It’s not the time for more church games or politics of who’s right or who’s not, it’s time for us to arise together and fight for our people, your nation to meet Jesus.

“David said thousands of years ago just before he killed Goliath “Is there not a cause in Israel?”.

“We pray that the Holy Spirit grips you deeply for your nation with the same question, Is there not a cause?

“We pray that you wouldn’t just have a cause, but that the cause would have you!

“He is calling us to not let our Hope fall asleep, Prayer fall to the wayside or the Passion in our hearts grow cold. He wants us to be fully Awake to Him and His purposes for our generation!

“We want to see Jesus commission you to take the gospel without fear into your daily life and for you to know your true destiny in God.

“Come and take your place as God raises up the name of Jesus high in the north.

It’s time to Disturb the Normal!”

Watch the promotional video below: