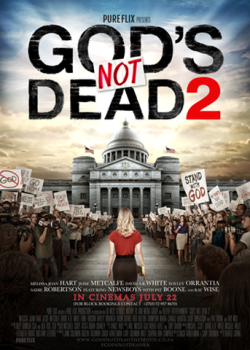 I have both read the book of this title and seen a preview of the movie. Interestingly, the novel was based on the movie, which is a reversal of the norm. The movie is a much anticipated sequel to God’s Not Dead; again the theme is public reaction to Christian expression in an American educational institution.

Having read the book and enjoyed it, my expectation of the movie was high, yet still surpassed. The basic plot is identical in both the book and movie with only a few minor changes in subplots. Yet each brings something unique – the movie is of course a more intense experience and the soundtrack and visuals add a great deal to the drama of the court case storyline. Yet Thrasher has fleshed out the characters well and there are further dimensions to relationships in the book, particular between the two main protagonists.

So if you do enjoy the movie [see trailer below], the book is well worth a read also. And vice versa.

High school teacher Grace Wesley answers a pupil’s question about Jesus in a classroom discussion. The pupil’s parents are offended and feel their rights have been violated. This results in a court case when Grace refuses the opportunity given by the school board to apologise and have the matter dropped. Will her faith and boldness lead to the loss of the career she loves?

Lawyer Tom Endler is back in his home town after losing his hot-shot lawyer position in the city. He is also battling to come to terms with the recent death of his mother. He is now a lawyer with the teachers’ union and finds himself defending Grace in her fight for her First Amendment rights. So he is not in a great frame of mind as he begins this fight that he does not even believe in. The book in particular shows how his attitudes change as he partners with Grace against the arrogant lawyer representing the aggrieved parents.

Deepening faith
Blogger Amy Ryan is a former sceptic who has found faith while battling cancer and watching the classroom battle unfold a year ago at Hadleigh University (as related in God’s Not Dead). Again, her journey towards a deepening faith as she reports on this case is more apparent in the book, but her character lends further interest to the movie, particularly as she is the connection with the News Boys, who are brought into the plot. Footage of them in concert adds to the emotion filled ending of the movie.

Grace, Tom and Amy are all likeable and credible characters. All three are also dealing with issues with parents, particularly brought out in the book, adding a further dimension to their struggles. Grace on the other hand, has a close and supportive relationship with her grandfather, who easily wins Tom’s respect. Pastor Dave, who is one of the jurors, features strongly in the movie.

Someone else who has problems with her parents is Brooke Thawley who is the pupil who asked the question leading to the conflict. She makes an impromptu court appearance which adds to the drama.

Woven into the story are a brief synopsis of the apologetics of Lee Stobel (author of The Case for Christ amongst others) as well as James Warner Wallace (Cold Case Christianity); both these men are witnesses for the defence. They both make excellent and rational arguments for the case that Jesus as depicted in the Gospels was in fact an historical figure. Both Stobel and Wallace play themselves in the movie, as do the Newsboys.

Entertaining and relevant
God’s Not Dead 2 is worth watching/reading not only for the entertainment value of a good plot, but also because the story is very topical and worthy of our discussion and interest. America has for decades now had a policy of removing all reference to Christianity from schools, citing separation of church and state, which is implied in the constitution. Ironically, this separation was meant to protect the church, rather than ‘protect’ secular society as it is widely used today. Although the court case in Gods Not Dead 2 is purely fictional, it is typical of what is happening in many courts of America. And this is just part of the growing animosity towards Chistianity in many spheres of society, particularly media. In fact, IMDb (International Movie Database) gives this movie a rating of 3 out of 10! Don’t let this put you off – it is merely illustrative of exactly what the movie strives to depict.

It is important to realise that South Africa is not far behind. There is currently a court case pending against five schools because of what is perceived to be excessive Christian influence. And of course there are other cases and legislation in the pipeline which challenge religious freedom that we as Christians once took for granted.

An important theme of this movie and book is the question of being willing to stand up against persecution in its various forms. Here loss of a career is at stake; however so many more Christians are facing persecution where their very lives are at risk. As various forms of persecution increase as antagonism increases, we all need to ask ourselves this question.

So in conclusion, Gods not Dead 2, both in movie and book form, seeks to entertain, educate and challenge. Please go see the movie at least, and encourage others, including your non church going friends, to do so as well. The movie is being released by Ster Kinekor in July. The book is a new release in Christian bookshops.

Keep up to date on the movie release at:
https://www.facebook.com/cmdentertainmentafrica/
http://www.godsnotdeadthemovie.co.za/