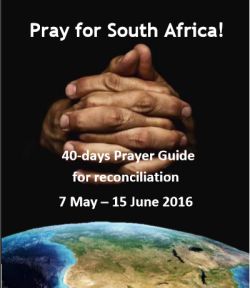 Plans to commemorate the 40th anniversary of the June 16 uprising in Soweto and to use the occasion to bear witness to racial reconciliation through Christ are enjoying wide support, said Rev Moss Ntlha, General Secretary of the Evangelical Alliance of South Africa.

“It is going to be a very powerful witness at a time when our nation is struggling with racism,” he said in an interview.

He said Christians in the West Rand townships and Soweto were getting behind the plans for the reconciliation campaign events at Orlando Stadium on June, 11 and at the Hector Peterson Memorial on June 16. Three Afrikaans churches, the Apostolic Faith Mission, the NG Kerk and the Hervormde Kerk have already expressed a commitment to attend and participate actively in the campaign. Ntlha said he was talking to the Full Gospel Church yesterday and they were upbeat about the Soweto events which are being billed as ‘Singing a New Song’.

He said that beneath the divisive social media conversations in South Africa and the polarising agendas of some power-hungry politicians who were opening old wounds for the sake of winning votes, he believes there is a deep work of grace going on in the nation to which the church in South Africa must bear witness.

On June 16, 1976 Soweto high school students set out on a march to Orlando Stadium to protest against the introduction of Afrikaans as the medium of instruction in their schools. They never got to the stadium – police opened fire on the students during a confrontation and 13-year-old schoolboy, Hector Peterson was one of the first of 23 people who died in a day that changed the course of the struggle against apartheid.

On June 11, 2016 Christians participating in ‘Singing a New Song’ will follow the 1976 students’ march route all the way to the stadium where they will participate in a reconciliation-themed service, said Ntlha. Among them will be members of the June 16 Foundation, who were high school students in Soweto in 1976, and people who were in the police and the army at that time. These former foes are joining hands in working to repair and rebuild schools, some of which are in worse shape than they were in 1976, he said. 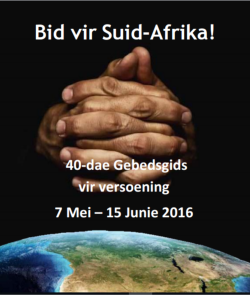 A number of people who will be at the Soweto reconciliation events are preparing by participating in a 40 days of prayer for South Africa campaign from May 5 to June 15. Jericho Walls Prayer Network has published  40 day prayer guide for reconciliation for the prayer campaign. An Afrikaans version, 40-dae Gebdedsgids vir versoening, is also available for downloading.

In Cape Town the Youth Transformation Africa (YTA) is hosting a Prayer Conference on June 16 at Sowers of the Word Church, Lansdowne.

“Our city and nation is in need of the church to unite in prayer like never before,” says Kyle Driver of YTA in an invitation to leaders and intercessors to participate in the event. Speakers include Pastor Andy Lamb, Pastor Barry Isaacs, and Bishop Phindile Nyanga. Four prayer networks, Prayer Mushrooms, Jericho Walls Prayer Network, Hebron Prayer Network and Youth Transformation Africa will conduct prayer workshops during breakaway sessions. The conference is free but people are requested to RSVP to admin@yta.org.za, along with their name, church and how many leaders or prayer leaders they are bringing.