Join us on a monthly “In The Garden Of Resurrection” journey towards a unique Christian prophetic art exhibition around the glorious theme of Christ’s resurrection. [/notice]

What must that journey have been like for Mary as she walked to the disciples burning with the message that Jesus was alive, with the revelation that He was surely God and had overcome death? I have joined Mary on her journey, and with me, a growing community of artists in Cape Town; journeying to the declaration of His resurrection with joy inexpressible and full of glory.

Exhibition Date: 4-7 October 2012
Artists submit 4 September by email. Email photos of art to catherine@esst.org.za
Artists can submit one to five pieces, with a maximum of three pieces selected for exhibition.
Fine art, sculpture, video, installation and photography can be submitted.
The art should be produced for the exhibition or be a maximum of two years old.
For more information:
Youtube:
Blog:
Facebook:
Prophetic Art:
Click here to listen to Dan McCollam teaching on prophetic art at the Bethel School of the Prophets in Redding, California, in 2010. (Downloadable with permission from the author.) 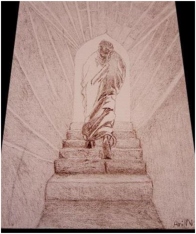 By Talitha Rabie — an example of an artist’s first musings on the resurrection of Jesus Christ for the exhibition.
To take part in the exhibition contact: catherine@esst.org.za

My journey from the empty tomb began in earnest four years ago after the dream I received in which the Lord said He was building a church here in Cape Town more glorious than the church of the nativity (where He was born) and the church of the Holy Sepulchre (where He was crucified). Now the mystery of His incarnation in which He displays His wondrous humility inspires a worship that can never grow tired. And as to the crucifixion – who can comprehend such love? What could be more glorious than this? Yet these two gifts – God’s human birth and God’s human death would not mean anything without God’s human resurrection – the resurrection is the point where it all becomes personal…my Father, your Father; my God, your God.

We encourage everyone to join in this journey of contemplation of the resurrection through art. However, a panel of accomplished Christian artists will select the art to be exhibited.

That said, the resurrection was the last revelation for me , something I had to dig deep for….

After I received the dream, I set myself upon getting a grasp on the resurrection – a deep revelation, so that my whole being would resonate with it.  In those brief moments when I have experienced revelation it has changed me as a person, brought irrevocable freedom and the deepest joy. When one receives revelation, it is more than knowing, or even understanding. Receiving revelation is when the word of God becomes alive in your spirit, and the word becomes flesh in you. One taste of revelation has spoilt me for any other pleasure in life.  I’m a revelation junkie.

Back in South Africa after the mountain high of Jerusalem and the valley low of my near death experience, I found pursuing revelation whilst wading through the mundane was something of a daily battle.  Somehow it wasn’t happening a lot (revelation), though I was picking up some clues like the gospel of John and all the other writings of John. His writings radiate with the glory of resurrection life – so much so that simply speaking the scriptures out healed me of a chronic depression that I had suffered from since childhood (it really did).

So I was being happy when one day, life came with a tide of busyness, as it can do, and I forgot my pursuit and gave up knocking.

I found my way back to the subject through something of a back door – death. I was seeing it everywhere. I saw it in the sick we were praying for. I saw it in those we prayed for and watched leave this world – a number of whom were Christians. Their deaths were premature and their eyes seemed to say they were tired of fighting. I saw it in the unbelief of fence-sitting friends; I saw it in the nations, and governments, in the fear dominated behavior of those who believe and those who don’t, and I was becoming sick with intolerance for the lack of breakthrough. Death was destroying people long before they had died. It was the last enemy.  I spent one whole year focused on how the power of death and the fear of death were destroyed by Christ at the cross. I even taught others to pray to establish victory over a spirit of death. And I kind of had a sense something was moving – even if it was just the size of the wiggle of a pinkie.

The dart was starting to hit somewhere near the middle but not quite bull’s eye. So I asked Father God, “how do we overcome these issues Lord, how do we overcome this attack?” And he answered me. With one word. He said, “Resurrection.” So I came again to that pivotal event facing the same puzzlement of why revelation was so elusive. I set upon meditating on the resurrection of Jesus Christ with renewed gusto.

And one night, at a time appointed by grace, Jesus revealed to me a gate called Resurrection, and by it He led me into His eternal realm of glory.

My eyes were opened to who I really was in Christ – a me I remember being a long time ago during one of my first encounters with Christ; a hope hidden somewhere based on a memory in my spirit from that time of being utterly free and holy with the holiness of God; even me. Since that moment I have begun to seek to relate to God as one who has been raised to eternal life, who has passed from death to life because that is what His resurrection has done for me.

When I approach Christ as one who has been raised from the dead I approach Him as one unburdened of sin and the flesh of sin, without even the memory of sin, but I am fully the me that I have glimpsed in brief moments – the one full of joy, overflowing with love, able to give love spontaneously and unreservedly. That’s my best self, humble, crowned with beauty. I had given up believing I could ever be that person …but this path of inquiring about the Resurrection restores my hope.

Jesus loves to lavish us with the highest worth, His life. When He, the firstborn from the dead, declares in Revelation, “behold I was dead, but I am alive forevermore” it’s so that we can know that we were dead, but are alive forevermore because it is no longer we that live but Christ who lives in us.

And there is more. Judgement is behind us. It’s the eternal Day One after Judgement Day for we who have received Christ. From now on we can forever enjoy the glorious love of the Father. Not in the least bit worried about sin, mine or those of others. Not worried about the state of the church or even the world. What for? That Christ in me is the hope of glory gives me a boisterous faith that the sovereign one will cause His glory to cover the whole earth.

When I was a teenager I had an experience of being taken to heaven where Jesus showed me everything. He gave me the grand tour. And after having showed me everything of heaven He explained he was going to wipe away the memory from my mind, leaving it only in my heart. But there was one thing He let me remember, and it was this… I stood before a vast window that overlooked the Kingdom of God and before me was a nation of people and they were all holy. He showed me the church the way it would one day look – a people without the stains of sin, misunderstanding or confusion. He did it to show me everything we do on earth for His Name is worth it – and that there will be an entire people, a world population that together will be radiant and beautiful in Him. Apart from God himself, it’s the most beautiful thing I have seen and probably ever will see.

For this reason my heart leans ever toward that time in the future when Father makes all things new, and the earth is a holy place, holy enough for Father to come and make his dwelling with us – because we have all, individuals, families, tribes and nations been raised from death to Life.