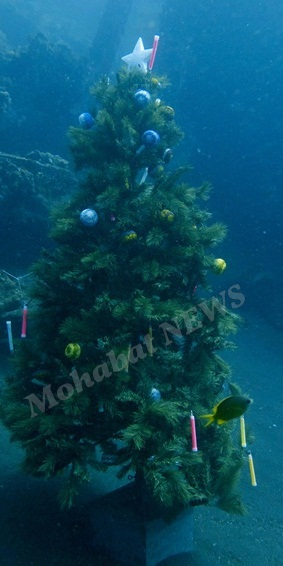 According to Mohabat News, Mohammad-Rasoul Bagherian, an Iranian Christian convert, now resides on Bali Island, in Indonesia. Mr. Bagherian was forced to leave Iran in 2010 after the Islamic regime of Iran intensified its pressures and threats against Christian converts by arresting 70 of them across the country.

He, together with his team, comprised of Hindu, Buddhist, Christian, and Muslim members, decided to take a Christmas tree 37.5 meters (about 123 feet) deep in the ocean as a symbolic act to protest against “severe religious restrictions, and persecution of Christian converts”, in different countries, especially in Iran. Although Iran has signed the Universal Human Rights Declaration and Christians’ rights are recognized in the Iranian constitution, Christians, especially Christian converts with an Islamic background, face discrimination and persecution on a daily basis.

This symbolic act by Mr. Bagherian, set a new record in the Guinness Book of Records as well. It was in support of all those who have been persecuted for their beliefs. The undecorated Christmas tree was taken 37.5 meters down into the ocean in the name of “the Lord Jesus Christ” and it took divers two days to take all the ornaments down into the ocean and place them on the underwater Christmas tree. When all was set, each member of the group praised their God according to their own religious rituals. As one described them, “In this way, they became ambassadors of peace and brotherhood, deep in the ocean”.

Lastly, a statement was signed by all participating individuals and organizations (Amnesty International, World Relief, Bali TV Network). The statement, then was sent to churches across Indonesia for them to sign as well, and later it will be sent to the UN Committee for Human Rights in New York. This action attracted broad attention across the world. The symbolic act confirmed the spread of a culture of peace and brotherhood, as well as increasing awareness by individuals, of their Human Rights. It also highlighted the necessity of peaceful defense of religion and prevention of violence.