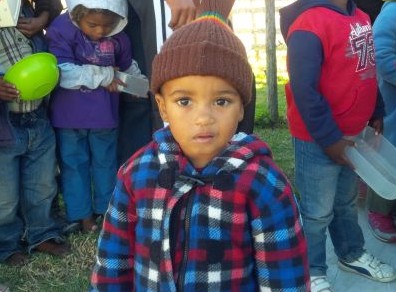 Rachelle is five years old and did not speak when she first came to the soup kitchen at Faith Hope Love Ministries in Greenbushes, Port Elizabeth. She ignored the other kids and only spoke to her mother and showed with her hands what she wanted.

Rachelle now has verbal diarrhoea… She did not get therapy, counselling or any medical intervention. “Rachelle got what every child needs most: love and attention from someone who will fight for them,” says Bernadette Spies, founder of the outreach.

Love and attention is what Bernadette gave Rachelle when this shy little girl made an impression on her heart between all the other children she feeds on a weekly basis. She started giving Rachelle little tasks to make her feel needed and told her: “As iemand met jou moeilikheid soek, kom roep jy my; ek sal hul regsien” (If someone gives you trouble, come call me and I will sort them out).  This helped the little girl feel secure and after three Saturdays, she said “dankie” (thank you) for the very first time.

Heartbreaking background
Rachelle’s background is heartbreaking.  Her father is abusive to her mother and other siblings due to dagga and alcohol. Her mother also took to drinking and this meant no food in the house since she was very young. “I spoke to the mother and had a long walk alongside her, helping where I can. And she got saved!”  Bernadette said excitedly.

“This little girl was so drawn back because of circumstances and bad things that happened in her little life. With a lot of attention, extra care and love, she started to talk. In the seven years of doing the outreach, I have not felt the love and a special touch of God’s hand in a situation like this one,” she says.

Bernadette said it reminded her of God’s unconditional love for us.  She said while we get so busy with our own lives, we forget to look at people and their circumstances around us. “I now understand the meaning of 1 Corinthians 13:13.”

“I know we are living in a society where everyone has a very busy schedule, but I ask you to please stop and look around. Behind that dirty little face is a heart of gold, a heart that’s calling out ‘just love me, spend time with me, speak to me, show me the way, play a game with me’. We as parents sometimes have a hard time dealing with our own kids– I know I have four of my own — but what a child is longing for might not be the expensive toy, a new cell phone or an ATM card to spend on whatever they feel like. Hug your child, say you love them — and those walls they’ve built up will come crumbling down. Ask God for guidance in the situation,” she urged.

Change of heart
Before she was saved, Bernadette used to sell chickens in the same area where she now runs the soup kitchen. She said because of her rude way of making people pay at the time and not having any empathy for their hardships, they used to see her as a “bad person”. When they [she and her former domestic help and best friend, Patricia] started making the soup, she testified about what the Lord had done in her life to those very same people. “Those people got saved that day. We prayed, I apologised to them and we have a wonderful relationship up until today,” she says. Since then she has a compassionate heart for these people who live in such difficult circumstances.

Bernadette started the soup kitchen in 2007 with her own funding. This is still the case today, but she managed to register as a non-profit company. Despite sometimes hardly making ends meet in her own household, she can testify of God’s miracles, not only for the soup, but also about people being set free from ancestral curses, healings and a tavern closing down due to their prayers.

“God is a God of miracles; He still heals, saves and does miracles today,” she says.

Needs
A shipping container was donated after they earnestly prayed for a place where the kids can come as a “hideout” and as a shelter when the weather is bad. The container can however only be delivered after a security wall for it has been built around the yard at Patricia’s house.  “We have been meeting in Patricia’s yard from the onset of the outreach and this is where the container will be kept,” says Bernadette. “So we are desperately trying to raise funds to get the wall built.”