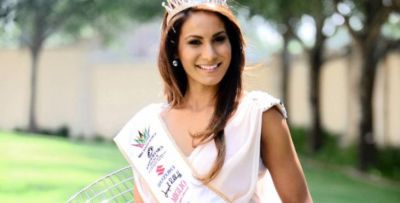 South Africa has an international ambassador in our very own Candice Abrahams who won the title of Mrs World at the 27th Mrs World Pageant at Dongguan in China this week. This mother of two went up against 45 other women to win this coveted crown. Shortly after her win the new Mrs World said in a statement: “What an honour to be able to bring the Mrs World crown home to South Africa. It has always been a dream of mine to win Mrs South Africa and to represent my country on the international stage; to be bringing home the title is just the cherry on top of my achievements over the last year.” Mrs Abrahams also made history as the first South African to ever win this title.

After winning the Mrs South Africa last year she shared; “I just feel like God has put me in a special place at a special time. I want to get involved in awareness. It’s for me now to give my all and make a difference in other women’s lives.” Looking back at her time when she was at school she revealed how she was bullied and why she dedicates her time to the grooming and mentoring of young girls.

CEO of Mrs South Africa Joani Johnson said, “We are beyond excited that Candice has taken this esteemed title, it is something that we have been working towards since she was crowned in October last year. We always believed that Candice would bring the title home and it is an overwhelming moment for the entire team that Candice has achieved her international goal.”

She came back to a packed OR Tambo International airport with well wishers welcoming her back home.

“It’s a really big deal, it’s exciting. I am so excited I have got so much planned and, being a mom and a wife, I am incredibly proud to take on the country and show you what I have to offer.”

“My entire Mrs World journey… I was that girl that said I am here, not for a competition; if I can walk away making one person feel special, which I did many, that was my goal. I actually didn’t do this to win, I went to win hearts and souls.”

She has plans for a number of projects that she is involved in one of which is to bless 1000 school children with stationery supplies.

The 32-year-old is married to Metro FM DJ Ismail, who presents the 9pm to midnight slot, Monday to Friday. The couple have a 10-year-old daughter and a 5-year-old son.

We wish her well on her new chapter and international role.