Old punk rockers don’t just get saved when they turn to Jesus. They set out to redeem punk music — at least that’s the testimony of Don de Necker, 38, one of the band members of Old Timers, whose first album, Soli Deo Gloria, is doing well in some surprising places.

The unabashedly Christian, South African, full-length punk rock album, that was “just made for fun”, has been well-received on a secular punk music radio station, Whatever 68, in California.

“Now they regularly play our music amongst all the anarchists, and they have sent our music to another US radio station that requested it,” says Don, who admits to being surprised at the positive reception their music has received from secular music stations , even in an interview with Whatever 68, in which he made it very clear that the purpose of the album was to glorify God. 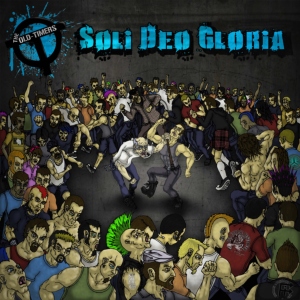 The Old-Timers have also been invited to submit music for soundtracks in Motocross and Christian drag racing movies in the US. Back home, Soli Deo Gloria (which means “For the glory of God alone”) was featuring at number 3 position in ReverbNation’s rock category for South Africa at the time of my interview and has received many glowing comments from listeners who enjoy its energy and original punk sound.

Don, a Port Elizabeth businessman, who used to drum and was into the punk scene during his teens and early twenties, says he stepped away from all of that after he became a Christian at the age of 23. But he believes that after giving him time to mature as a Christian, God recently drew him back into punk and so he began to create digital music tracks for fun. He sent some of his music to his friend Dave Emmerson, who is a missionary in Paarl. Dave loved the sound and offered to write lyrics, and so their collaboration began with musical influences including GBH, The Subhumans, Headnoise, Minor Threat and Hit The Deck. Dave’s heartfelt, predominatly Scripture-based lyrics  point to Jesus as the answer amidst rampant sin and decay in the world and believers’ daily human struggle against flesh and self. The music video which you can view below, entitled This City, is about Paarl, and the tension between the evil that lurks beneath the appealing surface of the city, and the writer’s love for the city and his longing to see it restored through the grace of God. It has appeal because it applies to any city, says Don.

The Old-timers’ unusual, high-tech, recording process evolved as Dave sent their separately recorded vocals and music (guitar and bass) to a friend in the US who owns a Christian record label, Caustic Fallout. The friend loved it and brought more people on board to help with the production of the album. Matt Lagusis (formerly of False Idle) at the Simpul Studios in Boise, Idaho, did the drum track.The album was mixed by Sef Idle at Simpul Studios, and digitally mastered by Lanthanum at Lanthanum Audio.Released jointly by Caustic Fallout, Thumper Punk Records and Veritas Vinyl, CDs are available for pre-order through the Thumper Punk Records and Veritas Vinyl webstores, and digital versions are available through iTunes, AmazonMP3 and most other digital retailers. Everybodywho participated in the making of the album worked for free out of a passion for God. All proceeds from the sale of Soli Deo Gloria will be donated to support the missionary work of Dave and his family with Siloam Christian Ministries (http://www.siloam.org.uk/089.htm), which aims to share the gospel of Jesus Christ whilst providing medical aid, education and social help.

Don says Old-Timers will be contributing to two compilation albums this year: an old-school Christian punk album, and a Christmas album. They aim to team up with somebody else to release another full album at the end of 2013.