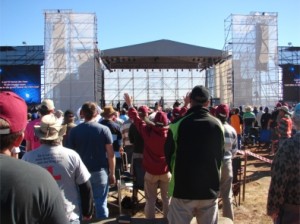 This week we reported on the controversy over e.tv’s screening of Naked News. In the latest development in this breaking news story, Family Policy Institute director Errol Naidoo is mobilising an e.tv national switch-off campaign. He says e.tv programming contributes to the degradation of women and children and family breakdown in South Africa.

With the local government elections looming, Nelson Mandela Bay pastor Afrika Mhlophe’s article on the church and politics is a relevant read. We are not supposed to bring politics into the church but the church — or the Kingdom of God — into politics, he says.

Also thought-provoking is a comparison of the victory speeches of President Barak Obama and President Abraham Lincoln, respectively after the killing of Osama Bin Laden, and the end of the terrible American Civil War.