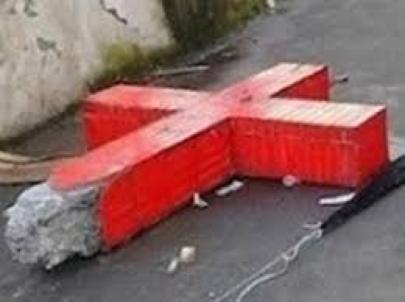 The pastor of China’s largest official Protestant church has been detained amid an ongoing government initiative to remove and destroy crosses on religious establishments.

Pastor Gu Yuese, the leader of China’s Chongyi Church, was reportedly jailed as part of the government’s cross removal campaign. However, rights groups say the pastor’s arrest is part of a bigger crackdown on the citizens’ religious freedom, according to Time.

On Thursday, Pastor Gu was reportedly placed in a “black jail” in Hangzhou for surveillance. The Three-Self Patriotic Movement (TSPM), the body that regulates churches in China, removed Pastor Gu from his position 10 days before he was detained. It is worth noting that he had been opposing the government’s cross removal campaign in Zhejiang since it was launched in 2014, the report details.

“His arrest marks a major escalation in the crackdown against those who oppose the forced demolition of crosses,” China Aid president and founder Bob Fu said of Gu’s arrest. “He will be the highest-ranking national church leader arrested since the Cultural Revolution.”

However, a TSPM official denied the reports and told Radio Free Asia that Pastor Gu was just assisting the government in an investigation. Gu’s wife Zhou Lianmei and some of his other family members have gone missing. It is believed that they have also been detained, the report relays.

Meanwhile, Chinese authorities said Gu is being investigated for alleged embezzlement. So far, they have not mentioned any evidence against the pastor in connection with the ongoing investigation, Premier reports.

The Chinese government, on the other hand, maintains that the crosses have been taken down from churches because of violation of planning and safety laws. It is also considered as a form of illegal activity under the communist country’s law.

China Aid says the Chinese government has removed at least 1,800 crosses as part of an effort to suppress Christianity. They have also demolished other church buildings due to the alleged violations.

In an interview with the Christian Science Monitor, Fu said the Pastor Gu Yuese’s imprisonment has conveyed what will happen to Christians who continually voice out against the government. He said it sends a message warning everyone to keep their mouth shut.