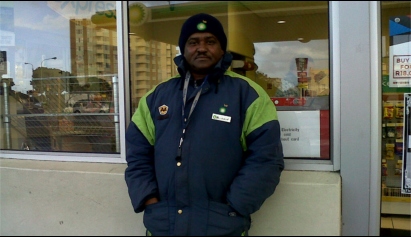 Port Elizabeth petrol attendant Hilton Essau has a heart for the poor and uses some of the money that he earns from tips to buy food for homeless people he has befriended.

Essau who is also a pastor at Fishers of Men Apostolic Body in Extention 32, in the Northern Areas, also provides spiritual food, spending some time sharing God’s word with his homeless friends near his workplace.

Gateway News learnt about Easau’s ministry during the bitterly cold and wet spell at the weekend when he posted an appeal on the Nelson Mandela Bay Prayer Page appealing for people to drop off blankets and food at the garage where he works for him to distribute to the homeless people. Prayer Page coordinator Nikki Vermeulen interviewed him at the BP garage at 5-Ways where he has worked for the past three years.

He said that he tries to set an example and show the love of Christ to the street people. There are  times however when he cannot buy food for them. His wife, Sandra, sometimes makes soup for him which he shares with some of his homeless friends.

He has also committed to try and keep the area around the garage  clean of illegal abortion posters, reports Vermeulen.

“He has definitely taken the scripture ‘be fishers of men” to heart’, ” she said.

Anyone who wants to assist Esau with blankets and food for the homeless could contact him on 079 177 8279 or sanhill46@ovi.com.