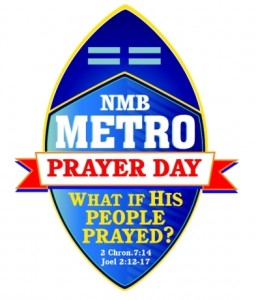 The event is a continuation of the historic NMB Metro Prayer Day at the stadium on October 22 when thousands of Christians prayed and worshiped together in a moving show of unity. A prophetic declaration that was made over the city at the end of the stadium prayer day has been engraved on a plaque and will be presented to the Executive Mayor, Cllr. Zanoxolo Wayile at the City Hall at the end of the prayer walk.

Prayer walkers are asked to gather at the main entrance of the stadium in Prince Alfred Road from 09:00 for departure at 10:00 on February 25. Walkers are requested to wear white t-shirts and are advised to wear hats and bring water. No banners are permitted and nobody may join the walk along the route. People who are not able to walk the distance but would like to participate are invited to join the proceedings on  Vuyisile Mini Square in front of the City Hall by 11:30. Non walkers are welcome to bring chairs.

Prayer guidelines will be provided at the start of the walk. Broad topics for prayer along the route are the Gateway City vision (i.e. for the metro to become a gateway for carrying God’s blessing to all of Africa), unity, local government, the police and education.
Walkers will be able to leave their vehicles in the Lakeside Parking Area adjacent to the stadium, which can entered via Gate 2. A car guard service will be provided for the duration of the event.

Walkers are requested to make their own arrangements for getting back from the City Hall to the stadium, e.g. arranging for vehicles to be parked at both ends of the walk. Parking will be allowed on Vuyisile Mini Square and there are further parking areas behind the city hall.

Church leaders in NMB recently committed themselves to working together on a five year transformational plan for the metro, aimed at making a tangible contribution in the church, business, local government, education and media spheres. They say that the prayer day at the stadium last year had increased unity among Christians in the metro, paving the way for working together for the good of the city.

The wording of the declaration that will be presented to the Mayor is:  “We declare and we decree that Port Elizabeth and the surrounding area will never return back to a heart of iniquity. We uproot any stronghold that would hinder God’s purpose.

“We humble ourselves and repent so that our city may be healed. We believe we will see the transformation of every heart to turn to God. We believe that our promise of purpose has been given by God and cannot be stopped. We take our responsibility to reach out in love to every person that God has placed in our lives. We arise as the united body of Christ to be a demonstration of the power of the Holy Spirit as a witness. Nelson Mandela bay will never be the same in Jesus name.”