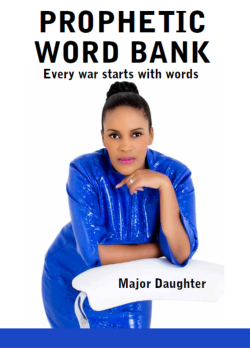 Proverbs 18:21 says, “Death and life are in the power of the tongue, and those who love it will eat its  fruit” (NKJV). If you are one those people who believe in the power of positive words then you will find the ‘Prophetic Word Bank’ a useful weapon in your arsenal. This is actually a title to book written by a lady who calls herself “Major Daughter” and in it she outlines declarations and prayers that should be made by anyone who wants to see his words change his world.

The subtitle to the book is “Every war starts with words” and throughout its pages the author equips readers with weaponry they need to win the war of words. She offers her readers various declarations and prayers that cover wealth, health, family, nations, etc. In her introduction the author asserts that “Christianity is a great confession” and her book is indeed a collection of confessions. This is not a book to be read but to be said.

In other words the book takes you through words and prayers you must make over your life and the lives of those you care about. Each area of a person’s life is covered by up to 10 prophetic declarations and prayers and everything is embedded with Scriptural texts supporting the idea that words carry spiritual power. This idea is not new and has grown to have as many defenders as detractors.

Its detractors see it as a rehashing of a new age concept called the “law of attraction”.’This law says that positive words and thoughts attract a positive reaction and that a person can change his status by changing his words. I suspect that Major Daughter would reject the association with new age but there are similarities between what she is teaching and what is taught by new agers who believe that there is some magical power in the words that people speak.

The idea that words uttered out of a person’s mouth carry creative force is favoured by many of those who believe in prosperity, divine healing, and other “benefits”. One of the Scriptures they use to support this idea is Hebrews 11:3 which tells us that the “worlds were framed by the word of God”. There is definitely power in God’s Word and this is basically what Major Daughter is attempting to show in her book.

She shows that restating a position of faith and not of fear and praying prayers that are based on God’s word will release the results that are promised in the word. However the book is too simplistic in that it gives the impression that if you make the declarations and prayers offered by the author then your life will be sorted out. I have never been convinced that someone else’s recorded prayers can be a panacea to all of my problems.

The “Prophetic Word Bank” is the first book on recorded prayers and declarations I have read and the reason for this is because I am sceptical of the idea of relating with God through words and emotions that do not originate from me. I don’t mind someone guiding me on how to pray but I am averse to the idea of regurgitating someone else’s prayers except the Holy Spirit-inspired prayers that are recorded in the Bible.

As for the words we speak I think it is unwise to suggest that they are inconsequential to our destiny. It is when I opened my mouth and confessed Jesus as the Lord over me that my life changed. Confessing Jesus as Lord is the greatest confession and making Him Lord over your mouth is great wisdom. If you don’t know how to do this then the “Prophetic Word Bank” is what you should bank on.