A monthly column for young ladies by Kate Fitz-Gibbon

There’s only one thing better than hearing a story first hand from someone who was part of something great, and that is being there yourself.

In reading this, you are going to experience both. You’ll hear the story of what God is doing first hand, and then you are actually going to be part of creating your own story.

Because this story of what God is doing is not for the “chosen ones”, its for everyone to be part of.

I’ve just been touring SA for three weeks with my good friend Brian Blount from Oklahoma, and one awesome team of friends. We lit fires with Jesus in people’s hearts in Cape Town, PE, Plettenburg Bay and Johannesburg.

Brian has a huge heart for evangelism, and because of his love for people, healings and miracles follow where he goes. What makes Brian so awesome is that he has no desire to be the big healing evangelist who comes to SA with a healing ministry. He came with a plan, and that is to see everyone he meets walk in radical healing evangelism. He came to give it away and that’s what he and the team did.

As one of the people on team, we were not the sacred anointed ones, but rather the ones who came to support people as they stepped into what God had for them. It was so much fun being part of this as God’s presence and power began to rock the nation and we saw Jesus heal over 500 people, 280 people come to Jesus, and many filled with the Holy Spirit.

This mostly happened while we were in restaurants, petrol stations, malls, shops, walking around towns, and going into local communities.

Fancy that, we hit the streets to minister to people a few days after our politics erupted. God always knows what He is doing, and planned the timing of this trip long before we knew what was going to happen, because He knew what people needed. We needed hope, and demonstration of the love of God. There are so many testimonies of people being radically healed, delivered, set free, overwhelmed by the love of God and deeply transformed that I wish I could give you a memory stick straight from my head so you could play them out like a movie. Instead I’m going to give you a highlights package and then you are going to create your own movie full of testimonies of what God does through you.

The whole point in writing this article, in doing what we did, is so that you would catch alight with the understanding that you can minister to anyone, anywhere.

You are already qualified because you are a son and a daughter of Christ, and you don’t need to be an evangelist. I’m not an evangelist, but ever since Brian activated me into this lifetsyle three years ago I have been praying for people as I go and seeing God touch people in a mighty way.

Its incredibly difficult to choose which stories to tell you about what happened, as every moment when someone receives a touch from Jesus is so special.

My highlights in Cape Town where when we were in Eerstrivier on a Saturday and we went out ministering in the streets. We went with Ricky, a pastor who has been loving that community so well for many years and the difference his love has made in so many lives is so beautiful to see.

We were on the streets for two hours and we saw one deaf ear opened (from childhood deafness), seven salvations, one lady powerfully filled with the Holy Spirit and healed instantly from a cracked rib. We had seven words of knowledge for healing for another lady and she was touched and healed for every single one of them.

Guys who were still high from the night before in a park were touched by the Holy Spirit and one of them got healed from a frozen arm, the other from a damaged foot.

We were invited into a shebeen/drug dealer’s house and got to pray for the whole family, where a woman who couldn’t breathe from TB starting singing, a young girl’s asthma cleared up, and depression got broken off another woman. A few other healings happened and encounters that day, and every team who was out on the street experienced similar kinds of powerful encounters. 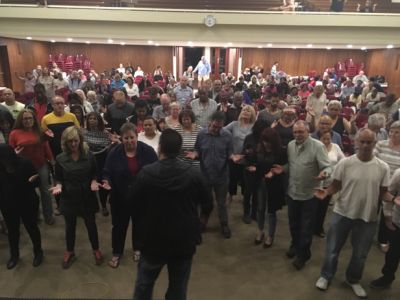 In Plettenberg Bay, we were equipping a few of the churches from PE at family camp to look, listen and respond as you go. So 82 people leave their not-so-comfortable tents from family camp to go into the town and practice the gospel.

It’s as simple as walking up to someone and saying: “Hi, we are out praying for people to show them love, is there anything I can pray for you for? Do you have any pain or sickness in your body?”

You can imagine how nervous some of them were as it was the first time they had ever done this. My team were amazing, they had never really prayed for anyone before on the street, and they just stepped into it.

The first lady we prayed for got healed of back pain and knee pain and got an amazing prophetic word over her life.

The next lady we prayed over nearly fell out under the power of God in the parking lot, oh Jesus. So beautiful! As we were praying for her friend, the same lady says: “I want to be able to pray for people too”. So I say: “Do you have a word for your friend?”. She shares the word and they both start crying from the love of God and hugging each other.

Onto Woolworths we go, and after praying for one staff member, many other staff start lining up to receive prayer as well. 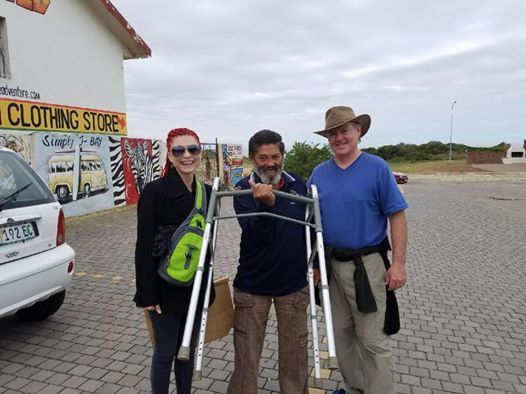 We get back to camp, and hear that the same thing happened to so many people in restaurants and shops, where the staff would begin lining up for prayer and healings, salvations, and prophetic words would flow.

This emerged as a trend on this trip, in every city, in the shops and restaurants, the staff would line up and receive salvation, healing and words over their lives.

In fact, one of the team of youth, went into in Pick and Pay, which is now known as Pick and Pray, and just by asking, they got given two offices at the back and 70 people came in for prayer. 20 salvations, 40 healings, and people slain in the spirit. One of them had never prayed for anyone on the street before.

You could do this, this could be your story, your next Facebook post. You have to go to the shops and you probably eat in a restaurant sometimes, why not stop and ask to pray for someone. Its so much fun. 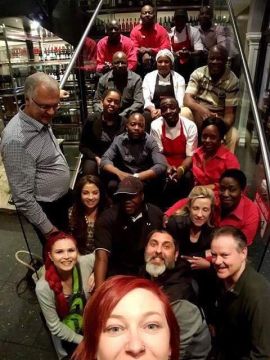 In Johannesburg, we ministered at a community gathering in Soweto. Brian called out three words of knowledge for pain and 20 people came forward. He only prayed for the first person, and then got whoever just got healed to pray for the next person who needed healing. Every single person got healed, some of them from chronic pain they had for 2-12 years.

The best part though, is what happened later that day after we left. The community went wild and started praying for one another and telling everyone and more healings took place. They literally ran with it and the community around them got empowered and blessed. This is the kingdom advancing. When each person is empowered to go and be the hands and feet of Jesus. 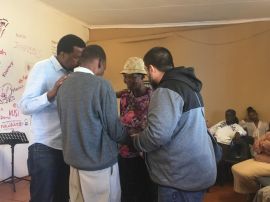 What I’ve shared here, is a tiny window into the things that took place in these three weeks. In three weeks so many lives were touched and changed. So in a year of you stepping out and praying for someone every time you go out, what could you see God do in your country? Now imagine if you show a few of your friends how to do this?

That’s the tipping point, and that is the change we are looking for.

AS YOU GO:
I want you to know, you can do this. You were reborn to do this. I am not an evangelist. I am a prophetic ambivert (thanks Michelle). I am not always open to talking to people, but God is moving in this country, and I’m going to be part of what He is doing. The harvest is ripe and you are part of this movement.

So in getting you ready to get out there, here are my tips that I learnt from Brian on this trip:

1. You don’t need a word of knowledge or prophetic word to pray for someone. Just ask if they need prayer for anything.
2. The confidence comes as you step out. You will feel nervous but that’s normally the enemy putting his feelings on you because he’s scared of what is going to happen.
3. Everyone needs love. If you are sharing the love, chances are people are going to want what you’re giving them.
4. We make praying for people so complicated, when its so simple. Just look, listen and respond. Look for where there is a need, listen to what God is saying and respond. Easy.
5. When you pray for the person, if they have pain, ask them on a scale of 1-10 how bad the pain is.
6. Pray short, quick prayers with your eyes open. Ask the Holy Spirit to come. Command the sickness or pain to go. Ask the person how they are feeling and whether the pain level has gone down, and to what number. Lets say it goes from a 10 to 5. Then say: “Ok then it can go from a 5 to a zero, can I pray again?” Chances are they will say yes.

I got Brian, and two of our awesome team members Angie and Michelle to make this awesome video just releasing you guys into what God has for you.