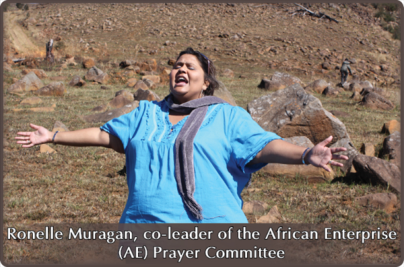 Intercessors who have been praying fervently and fasting for spiritual renewal in Pietermaritzburg will soon rejoice to see Satanic strongholds melting away and thousands of people embracing Jesus Christ as their Lord and Saviour, a renowned ‘prayer warrior’ has declared.

Ronelle Muragan, co-leader of the African Enterprise (AE) Prayer Committee for the week-long and city-wide ‘Choose-Zikhethele’ Evangelism Mission to start on August 12, was commenting after facilitating pre-mission intercessory prayers for Pietermaritzburg.

The special prayers, on July 28, saw a group of about 40 intercessors first interceding at the AE offices, in downtown Pietermaritzburg, before ascending two strategic mountain peaks that give a bird’s-eye view of the city, which has a population of about 800 000. At the World’s View Conservatory Peak and at a site just before the apex of the Swartkop, the intercessors proclaimed the supremacy and the saving power of Jesus Christ and declared blessings over the city.

Among jutting rocks, at the Swartkop high point, the Christians –who comprised some AE members of staff and other believers from various denominations– concluded their mission by having Holy Communion.

“We experienced a truly significant day because, after the intercessory prayers, we could feel that Satanic strongholds had melted away. We are now happy… and we believe that thousands of people in the city will commit their lives to Jesus Christ during the forthcoming (‘Choose-Zikhethele’) Mission,” Ronelle remarked.

Prompted by vision
She explained that the prayer intercessors’ mountain-top ‘invasion’ had been prompted by a vision one of the intercessors had had last year –of a devilish and frightening-looking giant towering over Pietermaritzburg. More dreams by some believers, including that of thick fog hovering over the city, made the intercessors restless, hence the strategic move to declare Jesus Christ’s supremacy on the strategic sites, she added.

At the mountain peaks, the intercessors were urged to make the fervent prayers and fasting an on-going spiritual warfare to cancel out Satanic declarations, and occult worship and practices, in the city.

It is said that, among other things, those in the occult world dedicate every Friday to casting spells and curses aimed at the breaking up of Christian families and influencing children aged below three years to turn against God, their parents and other family members.

Cancelled evil plans
“We felt a strong leading of the Holy Spirit to pray against, and cancel, all those evil plans. We believe that God will take the city with (the saints’) worship,” Ronelle stressed, pointing out the need to proclaim the word of God and later to enjoy spiritual transformation, as stated in Romans 10 and 12. She predicted joyous times soon for the intercessors, as they will see fruits of their self-sacrifice through spiritual renewal among Pietermaritzburg residents during and after the mission.

At both strategic prayer venues, the intercessors shared testimonies, visions, dreams and experiences concerning spiritual welfare, in general, and how the Pietermaritzburg evangelism campaign has come at a God-appointed time, in particular. Strikingly, some young boys and girls participated in the prayers, as well as the taxing mountain-climbing towards the Swartkop peak “to seek God’s face,” a young intercessor remarked.