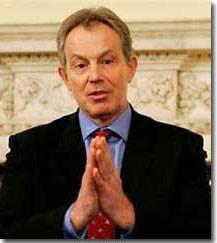 Tony Blair has warned Western leaders they must put aside their differences with Russia over Ukraine to focus on the threat of Islamic extremism.

In a speech the former UK prime minister – now a Middle East envoy – said powerful nations must “take sides” and back “open-minded” groups.

Mr Blair told the BBC ahead of the speech the West would pay a “very heavy price” for not intervening in Syria.
He said the opportunity to create “an optimistic solution” had been missed.

Mr Blair gave his speech at Bloomberg in London amid high tensions between Russia and the West over Ukraine.
Western leaders accuse Russia of using undercover military personnel to back separatists in eastern Ukraine – a claim Russia denies.

No-fly zones
Before the speech, the former PM – now envoy for the quartet of the UN, EU, US and Russia – spoke to the BBC’s security correspondent Frank Gardner.

He argued the West had a “responsibility but also an interest” in making sure that “huge struggle” was “resolved in the right way”.

“However much people may think we can just push it to one side and forget about it, I think that would be a mistake.

“Above all, we have to commit. We have to engage.”

On the issue of Syria, Mr Blair said he understood the UK’s reluctance not to take military action, but he would have pushed for the imposition of no-fly zones had he still been in office two years ago.

In his speech at Bloomberg, Mr Blair called on Western leaders to “elevate the issue of religious extremism to the top of the agenda”.

And they must co-operate with other countries – “in particular, Russia and China” – regardless of “other differences”.

He argued the threat posed by a radical view which “distorts and warps Islam’s true message” was “spreading across the world”.

“It is destabilising communities and even nations. It is undermining the possibility of peaceful co-existence in an era of globalisation.

“And in the face of this threat we seem curiously reluctant to acknowledge it and powerless to counter it effectively.”

He called on leaders to consider the “absurdity” of spending billions of dollars on security against an ideology which is being “advocated” in the schools and institutions of “countries with whom we have intimate security and defence relationships”.

“Some of those countries of course wish to escape from the grip of this ideology, but often it is hard for them to do so within their own political constraints,” he added.

“This struggle between what we may call the open-minded and the closed-minded is at the heart of whether the 21st Century turns in the direction of peaceful co-existence or conflict between people of different cultures.”