Hundreds of Western Cape taxi leaders and church leaders trekked 500km to a high-accident stretch of road in the Central Karoo on March 21 to pray for an end to road accidents on the route between Worcester and Aberdeen, and for road safety over the Easter holidays.

Showing remarkable resolve to pray on the so-called ‘road of death’ that is a major long distance taxi route linking the Eastern Cape and Western Cape, some 600 people — mostly from Cape Town — united in prayer on the R61 road between Beaufort West and Aberdeen. The event was organised by the CATA and CODETA taxi associations, in partnership with Reverend Bongani Mgayi and the taxi industry’s 15-15 committee.

Fifteen 22-seater buses and more than ten 15-seater taxis left the townships of Cape Town on Wednesday March 20, transporting church leaders and members and the public to the prayer. On the way, the taxis stopped in Touwsriver and Laingsburg for a prayer led by ministers from different denominations. The taxis arrived in Beaufort West on the morning of the 21st.

Bishops, apostles and pastors from more than 50 denominations joined the taxi leaders at the prayer. Some of the special guests were Sanele Nyoka, the Head of the Western Cape Department of Transport and Edward Njadu, the Mayor of Central Karoo District Municipality. Leaders from Uncedo Taxi Association, in the Eastern Cape, plus traditional chiefs also attended. Willem van Rooi, the Provincial Chief of Traffic in Central Karoo District, and his deputy, Mr Matiso were also in attendance. 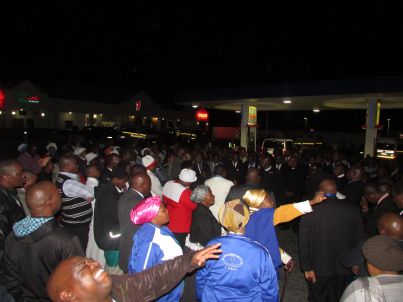 These dignitaries gave the taxi leaders and members of the public messages of encouragement. Mayor Njadu said: “From today this road will no longer be known as the road of death.”

After the short messages various bishops, apostles and pastors took turns to pray for road safety. The ministers also prayed for the families of the victims of the bus accident of March 15, at Hex River pass in which 24 people died. The ministers then joined taxi leaders and the special guests in laying memorial stones in commemoration of the lives lost on this road. The stones were also laid as a memorial that there shall no longer be deaths of this road.

After the prayer all the guests and members of the public returned safely to Cape Town. In addition to the free transport for the 1000km return-trip from Cape Town, provided by the taxi associations, CATA and CODETA also provided breakfast and lunch and money for food for each taxi and bus throughout the journey. 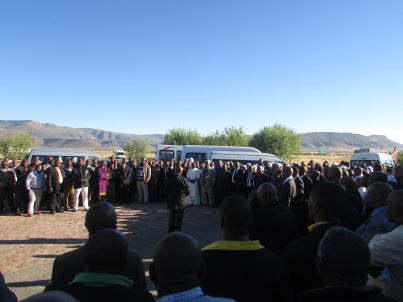