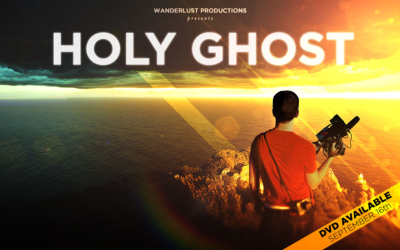 Trailblazing movie copies up for grabs!

Gateway News is giving away seven copies of Holy Ghost — the latest movie by Darren Wilson who made the pioneering and hugely popular Finger Of  God, Furious Love and Father Of Lights trilogy.

His latest film, which captures the Holy Spirit at work in the unlikeliest of places and in people from all walks of life, including well-known celebrities, will be officially released on September 6 at Bethel Church in Redding, California at the start of a major US tour in support of the movie. Wanderlust Productions will live stream the film for free together with a concert with Christian rocker Jake Hamilton, along with a special guest appearance by Brian “Head” Welch from the metal band Korn. This stream will be available for 48 hours and you can sign up for it here now!

The film has already been seen by a huge worldwide audience at a special digital premiere on August 9 and by 2 500 investors who have received advance DVDs for helping to fund the production through crowdfunding platform kickstarter — raising a record-breaking $360,000 in just 45 days to become the No. 1 most-funded, faith-based film in Kickstarter history. Now the backers are participating in an unprecedented campaign to drive viewers to view the world premiere on September 6.

HOW TO WIN A COPY OF THE MOVIE

To stand in line to win a copy of Holy Ghost, answer the question below and email your answer, together with your name, and city/town, to win@gatewaynews.co.za.

Question: When was the world premiere of Holy Ghost?

You can dramatically improve your chance of winning a copy of Holy Ghost by joining the Gateway News Super Subscriber Programme. We will be reserving 4 of the 7 give-away copies of Holy Ghost for Super Subscribers — Gateway News readers who pay a small, voluntary subscription to support our vital, fulltime ministry of spreading Christian news that promotes a revival culture. Our vision is to reach millions of Christians — especially throughout South Africa and the continent of Africa — through our news portal and through various other media channels.

The winners of the competition will be drawn and announced on Monday, Sept 15 and winners will be sent codes which they can redeem on the Wanderlust Productions website ( http://holyghost.wpfilm.com/)where the digital download is expected to be available from September 16.