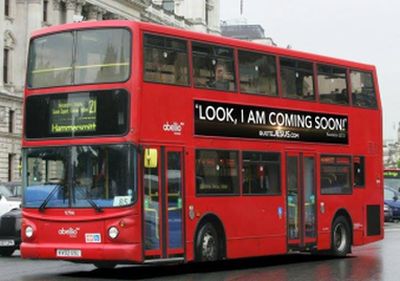 Originally published in The Christian Institute

The words of Jesus will be seen by millions of people this Easter, thanks to a new evangelistic campaign.

The ‘Quote Jesus’ campaign will see Bible verses quoting Jesus emblazoned on the sides of 75 London buses until April 24.

Among the quotes are: whoever lives and believes in me will never die; I am the way and the truth and the life; and Come to me, all you who are weary and burdened, and I will give you rest. (NIV 1984)

Howard Conder, who launched the project, said that “our vision for this campaign is to influence the hearts, minds and perceptions of this generation, to offer them hope and faith for a better future”.

He spoke of the comfort of Jesus’ words, saying: “The Bible is a book of hope and this generation is missing out because it has little knowledge of what the Bible has to say.”

International support
Support for the campaign has been widespread, with endorsements being received from Christians in America and Australia.

The campaign comes eight years after a controversial ‘atheist bus’ campaign by the British Humanist Association.

At the time, some buses featured advertisements saying: “There’s probably no God. Now stop worrying and enjoy your life.”

Watch the vision behind Quote Jesus explained below: