All those who attended the KMMC received prophetic words from the speakers regarding the future of South Africa and were urged to go forward after the conference and face the world as sons of God and His light in the world standing against racism and xenophobia.

“This was a strong theme that emerged from the conference: for us to stand as brothers in Christ and not to define or see each other in terms of race, ethnicity or culture,” says Jannie Moolman, coordinator of the event.

He says the KMMC has, since its inception, had a focus on reconciliation and the restoration of relationships starting in the home and extending to the community, nation, and neighbouring countries.

Louis Els, who spoke on Friday night, said God’s timing is perfect, even though it might not seem so to us; God always arrives, provides and acts at the right time.

Perfect time
Els used the example of Lazarus. When Jesus arrived days after Lazarus’ death, Lazarus’ family thought he had arrived too late, but he arrived at the perfect time, because He brought Lazarus back to life, which glorified God more than it would have if Jesus had merely healed him from sickness.

“Even though sometimes we pray and it seems as if God is not hearing or responding, I want to tell you that God hears every prayer and He might not come when you want Him to come, but He always comes, and He always comes just in time,” said Els.

“God wants to call men forth today, out of the state and condition they are in; out of disappointment, discouragement, sickness, and fear about what is happening in our nation or to their relationships with their children.

“Perhaps there are men sitting here who have prayed to God about these issues and they feel that God has not showed-up the way they thought He should.

“I have come to tell you tonight that you came to this place just in time and if God delayed His response to your prayers it is not denial;  sometimes God delays so that we can experience our dependency on Him.”

However, Els said that many of us have issues in our lives that we have to deal with for God to free us and deliver us. We have to face these issues that we have buried.

“Jesus called Lazarus forth from the grave in which he was buried and tonight God is calling all the Lazaruses in this place forth.

“God is waiting for us to uncover the issues in our lives that are holding us back; He is calling forth men out of their graves, because with God all things are possible.

“When you get with God all things are possible; for God to do nothing is impossible.

“God wants to call men forth to loosen them from their sickness. All they need to do is to believe and if they believe they will see the glory of God.

“God is saying, ‘Come forth Lazarus and meet Jesus so that He can untie you, set you free and let you go,” said Els.

Afrika Mhlophe, who brought God’s word to the tens of thousands of men gathered on Saturday morning pointed out that the reason reconciliation is incomplete in South Africa is that we have focused on a racial and political process, whereas reconciliation first has to be achieved in our spiritual lives by the grace of God, mirroring Jesus Christ’s forgiveness on the cross.

He said an emphasis on race, tribalism and ethnicity is dividing and imprisoning us.

“There are two spirits we must crucify, that is the spirits of racism and xenophobia, which do not come from God, but from the pit of hell,” said Mhlophe.

He said 43 people die in South Africa every day and it is time for men to take a stand as patriots of this nation, alone if necessary, because God’s call is to each man individually.

“The problem in South Africa is that too many good people are doing nothing even though we see things happening around us that we know are ungodly.

“We must act according to the will of God even though it might make us unpopular. We must not be defined by our culture, race, nation, or ethnicity, but as sons of God.”

Mhlophe stressed that there is a time when each man must decide whether and how he is going to serve God.

He prayed for each man at KMMC to receive the Holy Spirit who would cause them to see beyond race, and beyond their culture.

“I am trusting God that revival will begin today and that there will be a mighty move of the Holy Spirit, which will change the face of the whole nation.

“We need the Holy Spirit to work within and among us. We don’t need electric security fences and gates.

“We need the Holy Spirit. We need to live a Holy Spirit-filled life,” said Mhlophe.

Speaking on Saturday night Moolman encouraged men to take up their roles as sons to their fathers and fathers to their children.

“The ability to extend forgiveness is a vital attribute of relationships,” said Moolman.

He also reminded that it is vital for fathers to be good role models for their children, because young people will follow somebody and if the right people are not there as role models, they will follow the wrong people.

He urged the men to be responsible husbands and fathers, and dutiful sons according to the mandate that has been given to us as sons of God through Jesus Christ.

Moolman quoted Craig Hill saying “there is something on the inside of every boy that longs for the blessing of his father”, and “when a father blesses his son he empowers him to prosper”.

He encouraged men to bless their sons let them know they are loved and that their being loved is not dependent on performance.

“We have such a need for men to mentor young men; to pray for them, offer advice and walk with them in all facets of their lives.

“Oom Angus often talks of mentoring the men and how the young men have such a hunger for God and need spiritual fathers so desperately.

“Our country is short of spiritual fathers. Our young men are the future of the country, so when we leave KMMC this weekend lets us make a positive difference in the lives of the young men and our country,” said Moolman.

Seeing from God’s vantage point
Els spoke again on Saturday night saying that at this time we are positioned for choice in South Africa. This is the day and time for men to rise up in South Africa as leaders and see what God sees for the country from his vantage point from which we can make the right choices.

He said we live in a day and a time when God is calling for men to withdraw from what they see in the natural; to come before Him and have the scales from their eyes removed to allow them to see beyond the physical and the natural, where they respond with judgement, opinions and criticism, and see from a higher vantage point with God.

“The way we choose to treat our wives, children, workers and neighbours will determine how South Africa’s towns, cities, and provinces are changed  –  one family at a time,” said Els.

He said that having a higher vantage point is about living life from truth, not to truth; from God’s perspective instead of from an independent spirit.

“When we see God’s tomorrows for our lives it changes the way we respond today.

“It is living life out of a place of fellowship, intimacy and faith, whereby I know that God is with me, that He sees me and that if I listen He will guide me, which means that God is in control and I am dependent on Him.

“God is calling us forth to live from a higher vantage point. God wants us to have spiritual insight, because he has a word for each of us.

“I have realised that when you hear the word of God it produces faith.

“When you hear the word of God it gives you a boldness and confidence that you didn’t have before.

“When you hear the word of God it causes you to do things  –  to submit, to give up, to step-out in faith, because God has an assignment for each of us, but before He gives us the assignment we need to see from His vantage point and establish our identities in Him.

“God designed us with a purpose, however, not for our glory, but for His glory. He wants us to speak and act according to what He tells us, because His authority, clarity and liberty rest in His word,” said Els. 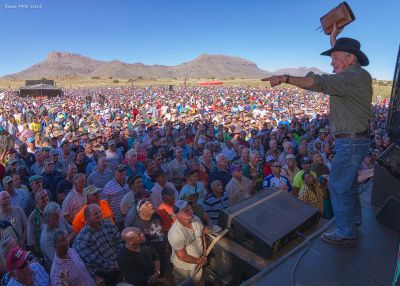 On Sunday morning Oom Angus welcomed people from every church denomination, race, sex and walk of life to the gathering saying that no man or group of men could organise such an event;  it is only by God’s grace that such a gathering could happen.

Revival was on the Mighty Men Conferences founder’s heart who urged all at KMMC not to merely go home and carry on as before.

“We are in a time of revival. The difference between revival and evangelism is quite simply that evangelism is man working for God, while revival is God working in a sovereign way on man’s behalf.

“Man can no more organise revival than he can dictate to the wind. Revival is a God thing.

“Charles Finney said revival is nothing less than a new beginning of obedience to God, a deep repentance, a breaking down of the heart, a bowing down into the dust before God with deep humility and a forsaking of sin.

“That is why we are here this morning, this is revival,” said Oom Angus.

He stressed that revival requires brokenness, repentance, restitution and holiness.

“God is going to bring us times of refreshing, which has already started in our hearts, but what are you going to do about it today,” asked the Mighty Men evangelist.

“God is about to challenge you, and I am telling you it is going to become uncomfortable for those who are not obedient.

Oom Angus asked those gathered as to whether they had seen their God.

“Have you experienced the power of revival,” he asked?

“We are looking at revival this morning, but with revival goes responsibility. What are you going to do with that revival?”

Oom Angus quoted from Ezekiel 3:17-19 “Son of man, I have made thee a watchman unto the house of Israel: therefore hear the word at my mouth, and give them warning from me.

“When I say unto the wicked, Thou shalt surely die; and thou givest him not warning, nor speakest to warn the wicked from his wicked way, to save his life; the same wicked man shall die in his iniquity; but his blood will I require at thine hand.

“Yet if thou warn the wicked, and he turn not from his wickedness, nor from his wicked way, he shall die in his iniquity; but thou hast delivered thy soul.”

“You see,” said Oom Angus, “you and I have a responsibility to go home and warn the people in our families, workplaces and communities that Jesus is coming back soon, very soon.

“And he is coming back for a people that are born again and believe that Jesus Christ is the only begotten Son of God.

“This is a mandate that God is giving to you and if you don’t do anything about it the nation will perish.

“As soldiers of the cross we have to go out into the world and share what God has done in our lives. God tells us that if we can trust Him, then He will use us beyond our wildest dreams.