[notice]Pastor Afrika Mhlophe writes about his impressions of the prayer dedication of the Eastern Cape to Jesus at Bhisho last Saturday. The dedication ceremony was part of a national campaign underway in South Africa.[/notice] 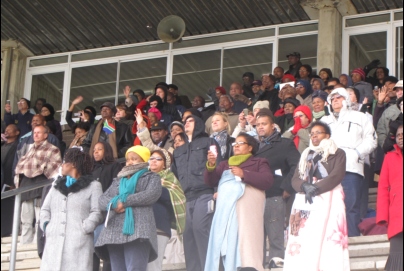 My trip started with picking people from 6.30 am and driving them to where a bus would collect us and others for what looked like a pilgrimage to Bhisho. It was raining and cold in Port Elizabeth that Saturday morning of the 09th June 2012 but we were all warm inside when we considered the significance of what we were about to get involved in. The venue for this dedication service was the Bhisho Stadium which is the same place the then government of Ciskei massacred a group of people as they made their way to Bhisho to register their dissatisfaction with the Bantustan government. Outside the stadium you are greeted by a plaque commemorating the lives of those who perished at the hands of the Ciskei Defence Force.

When we arrived at the stadium we were gripped with excitement when we saw other believers from various parts of the Eastern Cape and could see the excitement and expectation many people had. The event was well organised although the weather did not play along. My goodness, it was bitterly cold and we were outside in a stadium facing the elements! There was freedom and spontaneity in the stands as the crowd sang and danced while waiting for the PA system to power on. The praise and worship team on the main stage had no choice but to join in and sing the song that was already bellowing from the stands. There was definitely a vibe there.

The formal proceedings began with Olusegun Olanipekun of the Institute of Christian Leadership Development sharing about the purpose of this day. He led the audience in some prayer pointers which signalled the start of many prayers to come. Apostle Mangaliso Matshobane and Prophet Laurette Mkati of the South African Prayer Movement led the participants as they stood and brought repentance before God for things like discrimination, corruption, sexual sins, idolatry, violence, syncretism, etc. Prayers were also made for different spheres and domains of life such as politics, business, arts and church. Representatives from different districts of the province stood and dedicated their respective districts to the Lord. Some of these representatives even brought tokens like soil, agricultural produce and other things that represented their districts.

Focus was also given to the provincial government and special prayers were said for troubled departments like education and health. Then there was the breaking of bread in the form of Holy Communion which we all partook of. The program closed with the singing of the National Anthem, Nkosi Sikelel’ iAfrica.

Now do gatherings of this nature make any difference in the spiritual environment of our nation? I believe they do. I believe every major move of God has to be preceded by deep repentance for our lethargic walk with God. It must also be characterised by us consecrating our lives to God and submitting to the whole counsel of His word. It was therefore fitting that the last prayer to be made was for a revival that will once again sweep across our land. Apostle Linda Gobodo, who led this prayer,  reminded delegates of the many prophetic utterances that identified the Eastern Cape as where the last major move of God would start.

We stood under an open sky and declared God’s sovereignty over the whole province. We dedicated every town, city, river, mountain and everything in this lovely province to Jesus.