Opponents of abortion in South Africa and overseas have been participating in co-ordinated prayer and picketing campaigns since February. 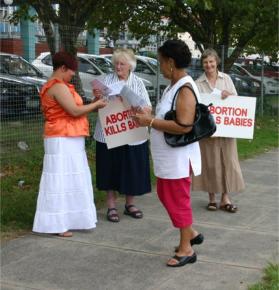 In South Africa, pro-life Christians held “life chain” events in various centres to co-incide with the 14th year since abortion on demand was legalised in South Africa on February 1, 1997. Meanwhile pro-life advocates in 243 cities around the globe yesterday began the annual 40 Days for Life initiative, a coordinated international campaign that co-incides with the Christian season of Lent leading up to Easter

Gateway News spoke with Frans van Aardt of East London, who is one of a group of Christians that have been taking a public stand on the abortion issue since October 2009.

“The issue has always been very close to my heart,” said Van Aardt, explaining what prompted him to take action on the abortion issue. “Working in agriculture, I am always looking for the increase, whether it’s a sheep or a cow. I know what is involved in the start of a life and abortion breaks me. As far as I am concerned when inception takes place, that’s it. There is no question about what you are killing in an abortion procedure.”

He said that before he and his wife Judy became regular pro-life campaigners, they linked up with Breath of Life, a Christian-based organisation that helps women to cope with unplanned pregnancies. In October 2009 they participated in their first life chain picket line outside Frere Hospital to mark International Life Chain Day. Last month, on 6th February, they participated in their 4th national pro-life event, when they took part in a prayer chain to mark the legalisation of abortion on demand in South Africa. About 30 people, from local churches and the Godly Governance Network took part. Similar events were held in Cape Town, Durban, Boksburg and Potgietersrus. Christian Action Network (CAN), which co-ordinated the February prayer chains also placed an obituary notice in Die Burger newspaper, to mourn the legalised killing of more than a million babies in South Africa since 1997. According to a CAN media release, the Cape Times and Argus newspapers refused to carry the obituary notice. Together with Tunisia and the Cape Verde Islands, South Africa has the most pro-abortion policy in Africa, allowing abortion on demand without restriction as to reason.

Van Aardt said that he and a few other East London Christians sometimes picketed on the street near the Marie Stopes Clinic where abortions are performed. They handed out flyers containing information about abortion and alternatives to abortion. He said nobody had ever objected to their picketing or flyer handouts. He said that anybody interested in taking a public stand against abortion in their area should contact CAN (at 021 – 689-4480/1 or info@christianaction.org.za) for material, including posters and flyers. Pro-life resources can be downloaded for free from the CAN website.

The international 40 Days for Life initiative that began yesterday and which runs until April 17, is taking place in the United States, Canada, England, Ireland, Australia, Belize, Spain, Georgia and Armenia. It consists of 40 days of prayer and fasting for an end to abortion, 40 days of constant, peaceful vigil outside abortion centres and 40 days of pro-life community outreach. Cape Town Catholic pro-lifer Peter Thorp will be fasting and praying outside Marie Stopes clinic in Bree Street, Cape Town central every day from midnight until 9am for the entire 40 days.

CAN reports that nine abortion centres in the USA have closed following 40 Days for Life prayer vigils (since the initiative was started in 2007), and at least 43 abortion industry employees have quit their jobs.

In another development, a report by the United Nations Human Reproduction Programme (HRP) expresses concern that a number of health professionals in South Africa who refused to participate in abortion procedures on moral grounds were presenting a “barrier” to legal abortions. The HRP recommends an expansion of “values-clarification workshops”. 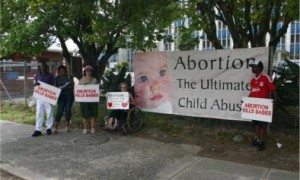