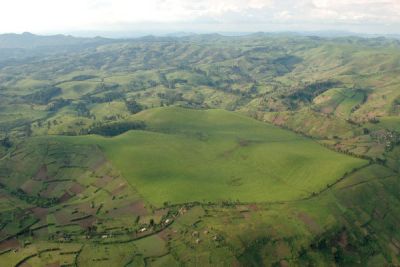 Church leader, author and television personality Pastor Enoch Phiri tackles the land issue in South Africa. It’s a biblical priority and the Church should be at the forefront of finding solutions, argues the founding pastor of Restoration House in Soweto.

South Africa is at a crossroad yet again. The unfinished business of transition to a democratic nation has caught up with us and we can no longer hide.

The conversations we are having and decisions we are making today have the potential to change the future of our nation for better or worse.

It is no longer just the conversations of the ruling elite that matter now, but those of every South African.

This was clearly demonstrated when an individual in Durban expressed her thoughts about holidaymakers in Durban.

What began as Penny Sparrow’s views and perhaps a reflection of conversations she may have been having with her friends, opened a can of worms and has forced the whole nation to face the reality that we have never really dealt with all the issues coming into this new democracy.

We got caught up with the euphoria of a new democracy, the international attention we received and we were under the Madiba magic, so we did not pay attention to the details of the agreement that was reached.

It is for that reason I am grateful for the opportunity to be part of this discourse, to share my thoughts around the subject at the heart of tension in the nation — the land and economic transformation subject.

We got caught up with the euphoria of a new democracy, the international attention we received and we were under the Madiba magic, so we did not pay attention to the details of the agreement that was reached.

Does South Africa need land redistribution?
South Africa is a beautiful country. This country is well endowed with gold, silver, diamonds and many other minerals.

The land of South Africa is fertile and we have such diverse weather patterns that as a nation we should have food security and also not be lacking in mineral resources.

However, this is not the case as we all know.

The land of South Africa that is endowed with minerals does not unfortunately benefit the majority of the people of the country.

South Africa has amongst the highest income inequality gaps in the world.

Since the dawn of democracy we have seen the country’s economy rise but with very little impact on the lives of the majority of the inhabitants of the land.

Since 1994 we have adopted many policies aimed at addressing the subject of economic transformation.

We started with RDP (Reconstruction and Development Programme), then GEAR (Growth, Employment and Redistribution), and then ASGISA (Accelerated) until we ended up with the National Development Plan and now we are talking Radical Economic Transformation.

All these powerfully-articulated policies failed to archive their intended goals.

While there are many issues surrounding policy implementation, such as lack of capacity, I believe the policies fall short of transforming the economy when aimed at economic transformation that is entirely disconnected to the subject of land.

Why land? — Biblical lessons
I would like to refer to the bible, as we all know it is not just a holy book but the bible is in fact, a historical record of true events of how God dealt with nations on many subjects.

One of the subjects that is clearly close to God’s heart is the subject of land.

Whenever God wanted to free people from bondage He promised them land.

This was the case when He delivered the children of Israel from Egypt which at the time was an economic super power (Exodus).

Whenever God promised to restore a people, He promised them land.

This was the case when the children of Israel were in exile.

He spoke through the words of the prophet Jeremiah when the land had been destroyed and the city of Jerusalem destroyed and said that He would redeem them from captivity and restore the land back to them.

He set boundaries for the land He was giving to Israel, to ensure they knew clearly what their portion was, and that anything beyond that was pure ambition and perhaps greed.

Everyone was meant to sit under their own vine and fig tree.

What the bible also teaches us is that in His wisdom, God knew that people being people would be led by their ambitions and in dealing with each other, some would lose their lands and become slaves.

Even if the slaves brought it on themselves for whatever reason, God did not intend for anyone to die in a state of slavery and bondage.

He gave laws that every seven years slaves must be released and their debts be written off.

And He knows that the basic human need of shelter means there must be land upon which this shelter can be built. So to God, land is just a starter pack to life.

Provision to start afresh
He gave provision for people to start afresh every seven years. But His generosity didn’t end there, He also made provision that those who may have lost or sold their land should be able to recover it at the end of 49 years.

This meant in every generation, each family would be given an opportunity to start again on the land of their forefathers. If parents had lost it because of bad fortunes, the children stood a chance to recover the land and rebuild.

Why would God see fit to put such laws in place? Why would He not want people to rot in jail as we often say?

He reminded the children of Israel of how He took them out of bondage in Egypt.

His compassion and love is with those who are oppressed.

God does not desire to see the people He created rot, because every person is made in His image and He has put treasure in each person and He desires to see people fulfil their purpose.

And He knows that the basic human need of shelter means there must be land upon which this shelter can be built. So to God, land is just a starter pack to life.

What went wrong in Africa?
If we remember the story in Exodus, Moses came to Pharaoh a number of times and Pharaoh refused to let the children of Israel go.

But after he came under pressure when God had confronted him with a number of plagues, he began to agree to let Israel go but he wanted to keep their wealth and their children and therefore grant them only partial freedom.

Many Israelites at that stage were ready to accept any deal from Pharaoh just to get some relief from their hard labour he had put them under. And I believe that is what we did in our country, we accepted partial liberation.

We agreed to leave our wealth and our children behind. And today we have an opportunity to reflect with the benefit of hindsight to come back to the negotiating table, this time to negotiate true liberation.

After World War II when it became clear that the colonial projects in Africa were no longer sustainable and that nations needed to be liberated, the Pharaoh spirit rose up in the colonial nations.

The colonisers began to devise strategies to ensure that Africa would just receive partial liberation.

When people are dispossessed of land and its minerals that is supposed to feed them, violence becomes a norm of society.

Negative effects of ignoring land redistribution
In Jeremiah 34:8-22, the children of Israel were now settled in the land and were in charge, however they refused to proclaim liberty to their slaves.

The bible says they were to proclaim freedom but they changed their minds.

When God saw how they changed their minds concerning liberation of the poor, how they came up with new plots to enslave them again, he said: Therefore thus says the Lord: ‘You have not obeyed Me in proclaiming liberty, everyone to his brother and everyone to his neighbour. Behold, I proclaim liberty to you,’ says the Lord — ‘to the sword, to pestilence, and to famine! And I will deliver you to trouble among all the kingdoms of the earth.’

When they refused to grant liberty and restore people, God gave them over the sword, to pestilence and to famine.

This does suggest to us that violence is deeply connected to the subject of restoration.

When people are dispossessed of land and its minerals that are supposed to feed them, violence becomes a norm of society.

So what should be done?
Civil Society represented here and elsewhere must wrestle with the initiative from the politicians in leading the land debate because of the biblical calling about the issue of land.

It is clear that after 23 years of democracy the politicians have failed the people on a matter so crucial, on a matter as deeply spiritual as land.

The failure to resolve this matter also reflects badly on the faith communities and it is clear that we have been found wanting and slumbering, allowing the issue of land to now become the next political football ahead of the next elections.

Neither tthe extreme of rampant and disorderly land occupation, nor the continuation of a land policy that has clearly failed will move our nation forward.

The sudden change of approach by the ANC on the issue of land, while I welcome it, must be approached with caution.

Suddenly there is a willingness to look at a radical approach to the issue of land.

We need to ask ourselves why? The answer seems quite simple to me — once again the hopes of our people are being toyed with — something that we as the faith community have a responsibility to resist.

The failure to resolve this matter also reflects badly on the faith communities and it is clear that we have been found wanting and slumbering allowing the issue of land to now become the next political football ahead of the next elections.

Is this even possible? This answer must be found following a thorough national dialogue and soul searching about how the dispossession of land must be reversed the same way that God envisaged for His children in the scriptures.

Until we face this dilemma the land question will remain a hindrance to true liberation.

The Church must take leadership to steer the nation in this dialogue for the sake of the future of our country.

The land CODESA must, in my view, deal with the following questions:

May the good Lord guide us as we grapple with one of the most fundamental questions facing our nation.