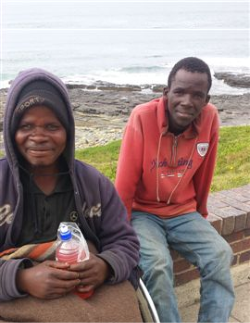 Lennox Kwakweni lives on the East London Esplanade, more precisely, on the sea side of the little wall that borders the pavement, where there is no protection from the wind and cold coming off the sea.

I know him by his Xhosa name but he prefers to use his English name for the story. I see him every day from my fifth floor flat. He gives a big grin when I tell him I worry when I don’t see him.

I am shocked to discover he is more than a decade younger than I am. Born in 1973 on a farm in Berlin, he went as far as Std 6 in his schooling. He is a diabetic and had a lame leg amputated years ago. He doesn’t remember exactly when it was.

He says he has been on the streets since 1999. His brother has his ID document and has also claimed his disability pension since his mother died a few years ago. He has never married and has no children to take care of him. Last year a man from the South African Social Security Agency (Sassa) came to see him but never returned.

Help from friends
His friends have fixed his broken wheelchair and tied it together with wire. Thembelani Gxalathana, 33, and his friend Andile help Lennox by fetching water for him and going to buy him food. Lennox survives on donations while Thembelani and Andile do some car guarding. Andile is not around when we chat and Thembelani can’t remember his surname.

Lennox, Thembelani and Andile are part of the growing number of people living on the street in East London which is the only metropolitan city in the country that does not have a shelter for the homeless. The local newspaper, the Daily Dispatch, reported last year that 96 people had died on the city streets in 2013 alone.

But now there is a glimmer of hope.

A group of people have joined forced to form the East London Shelter Committee (ELSC) and are looking for premises where they can offer the homeless a safe place to sleep at night.

Newly elected chairperson, Michelle Kerr, who has agreed to take up the challenge and spearhead the initiative, said the shelter was not only for providing accommodation and food for the night.

Residents would also be required to pay a small fee per night and the rest would be funded by grants and donations as happened in other centres.

Kerr, a Director in the Provincial Planning and Treasury Department has been seconded to Buffalo City Municipality for two years to assist in the Finance Department. The mother of three, whose youngest is a two month old daughter, has a Bachelor of Accounting Science degree and completed five years of articles.

Five public meetings have been held and have attracted a diverse group of people including social workers, nurses and businessmen. The meetings were initiated by Richard Mogg, the visionary founder of the Berea Gardens complex for senior citizens.  He is also on the committee.

Now retired, Mogg has always had a heart for the homeless as does newly elected chairperson Kerr.

The ELSC has applied to fall under The Haven, which is an established organisation running 14 shelters in the Western Cape. It provides temporary shelter, physical care, social welfare and family re-unification services to adult homeless people typically described as “street people” or “vagrants”.

“I have informed The Haven’s CEO Mr (Hassan) Khan that we would like to establish a Haven shelter in East London. I am currently awaiting the membership forms from him. Once he has them he will take them to be discussed at their next board meeting.”

Kerr said they were not setting up an independent Non-profit Organisation because they did not want to have to “re-invent the wheel”.

“They understand shelters and have all the policies and procedures in place already and they will be sharing their knowledge and expertise with us as a committee,” she said adding that finances would not be an issue as they would be a branch with their own bank account and all fundraising and donations would go into the local account.

Kerr said the shelter needed to be centrally located, so either the CBD, Quigney, Southernwood or surrounding areas.

Based on my personal experience in a ministry to street children, I believe this is a real opportunity for the homeless. In our street children ministry we saw lives changed and those without hope being filled with plans and dreams for the future. Some managed to get their lives on track. Others like Thembelani are still struggling and waiting for a helping hand.

Deaths on the street
I have known Thembelani since 2002 when we started Sakh’ingomso (which means we are building our future). Thembelani tells me that two of his friends I knew well, Ayanda Tutwana and Kwandile Lose, had both died on the street last year. The three of them were always together.

Memories come flooding back and I think of all the young boys and men I have known who have died or been murdered — such is the harsh reality of street life.

Ayanda was stabbed one day and with no access to help, knew I would be at the Wimpy on the Monday morning. His friends brought him, dripping blood, to my car and I took him to Frere Hospital where he was attended to. (I had personally witnessed health care professionals treat the boys with disdain and contempt even when I had been present so they would often wait for us to help them.)

Sometime later, the young man who had stabbed him came to me one Friday morning at the drop in centre we ran at River Park and apologized for what he had done. It was always busy and I just acknowledged what he said without spending time talking to him. I wish I had been more sensitive in that moment.

The following week I heard that he had been beaten and kicked to death and his body found behind a garage in Southernwood that same weekend.

‘He knows my name’
His was the second body and the last I went to identify at the police mortuary. I could not go again. That day as I was driving home, Don Moen was singing on Link FM, ‘He knows my name’. I cried all the way home.

God knew his name and all the other young men and women who have died without ever being afforded a real chance at life.

*The next supporters meeting which is open to anyone who is interested in helping is on September 28 at 12 noon at St Albans Church in Vincent and the next committee meeting is on October 14.