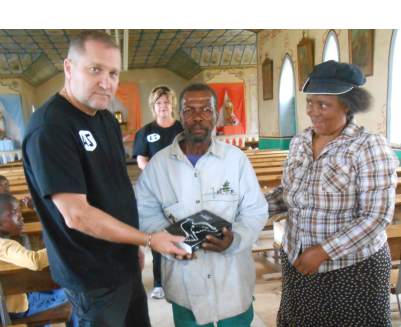 A 65-year-old man receiving his first Bible from Eben Grobler and Benita Grobler (background) at the church at St James, Lesotho.

A Despatch family is heading back to Lesotho next month with 500 Bibles after their lives were changed forever during a trip last year in which they handed out 50 Bibles in a remote mountain village. Next year they plan to return with 5 000 Bibles.

“It started as a small holiday trip, but then reality struck us like lightning,” said Eben Grobler, relating how deeply moved he, his wife Benita, and their children, Chantelle, 17 and Ivan, 12, were when they discovered the great hunger for Bibles among the people they encountered and the many people in the area who do not have Bibles.

When they gave a Bible to a 65-year-old man he knelt in front of them to thank them. He said it was his first Bible and he had been asking God for one for years. Eben said the man’s faith boosted their own faith to keep on praying for God to heal Benita from pain she has suffered for years as a result of a minor operation that went wrong.

“To be honest. When I tell people about our project it feels like God is taking control of me. Sometimes I really get carried away and after a few minutes I realise that the person who I am talking to has tears in his or her eyes. Only then do I realise that God is working in that person’s life now. How fortunate I am to be able to tell the story and be part of His great work. Suddenly our whole life gets a different meaning and we just want to do more for Him,” he said.

Grobler said he gave his life to Jesus in Grade 8 and had further experiences at school, in the army and when he joined the Fire and Emergency Services in 1990, that deepened his walk with the Lord. Then he met and married Benita, who shared his love of God. Two months before they were married doctors told them she would not be able to have children — but she was pregnant a month after they married.

“At the age of 30 I told Benita that I would love to go on a bike trip for my 40th birthday. At 38 our life changed when a small operation on my wife went bad and she lost the use of her arm partially. After 12 operations and a lot of money I realised that my dream was not going to finalise due to money constraints. What I never realised was that God had a bigger plan for me, and also for the rest of my family.”

He said that after he attended a church service in Despatch about missionary work, God told him that if he committed himself to taking Bibles with him on his 40th birthday, He would make sure that he had a motorcycle by that time.

“Now this may sound strange and like a negotiation session with God, but I want to make it clear that it was not the case. The commitment came clearly from God,” he said.

Motorcycle trip
God faithfully provided an old motorcycle in 2010 and after doing some work on it, it was ready for a big trip. Grobler and two friends rode to Lesotho where they gave away 30 Bibles at St James village in a mountainous area about 70km from the Sani Pass. Having established the need for Bibles in the area, Grobler returned with his family and 50 Bibles in 2013. This time they travelled by 4 x 4 and the big idea was to show his family where he and his friends had been by bike. But the focus of the trip changed when God touched their hearts about the need for Bibles in the area. They committed themselves to adding another 0 to their 50 Bibles and to returning in 2014 with 500.

He said that due to her health problems Benita had been declared temporarily medically unfit for work. The Bible project has given her “a new purpose in life”, he said. It has also given an opportunity to others to share in the project by donating a Bible or contributing towards the project and knowing that they are changing people’s lives for ever and giving people an opportunity to go to heaven.

“We are now busy collecting stationery, beanies and blankets as winter is very cold and temperatures can be minus 15. The travel and accommodation is for our own account! We will travel in three 4×4 vehicles — our family, the Bekker family and two friends Morne Grobler (he did the bike trip in 2010) and Werner Doubell!”

The team will depart for Lesotho on April 25.

Grobler said: “We would like to thank everybody who contributed to making this mission possible. This is not a ‘Grobler’ family project. Every person that makes a contribution forms an integral part of the project itself. We do this for the glory of God and to further His Kingdom!”