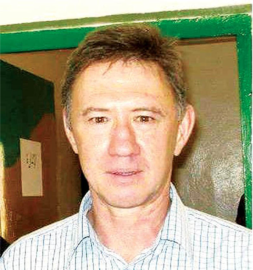 The heartbroken family of South African teacher hostage Pierre Korkie, 56, who died during a failed US rescue mission in Yemen a day before he was due to be released say they have forgiven his al-Qaida captors. An American journalist Luke Somers and 10 al-Qaida terrorists also died in the mission early on Saturday morning.

Korkie’s wife Yolande, who was kidnapped with her husband in May last year and then freed in January this year, says in a statement released on behalf of the family that in searching for an appropriate response to the tragedy, the family has chosen to forgive.

“We choose to love. We choose to rejoice in the memories of Pierre and keep him alive in our hearts. We honour Pierre’s legacy and give Glory to God for his life and
death. We resolve to live in the embrace of God…until our time comes to be reunited. Even though this pain is overwhelming us right now, we choose to believe that this too will pass.”

A memorial service and a private burial service will be held later this week in Bloemfontein. More details will be released later, says the statement. Korkie’s body is expected back in South Africa today.

According to a report in Eyewitness News (EWN) it is understood Korkie was killed in crossfire between al-Qaeda and US forces, although the Americans claim he was executed by the terrorists. Meanwhile, US Ambassador to South Africa, Patrick Gaspard, says those involved in the failed rescue mission had no idea Korkie was being kept in the same place as Somers or that he was set to be released the following day after lengthy negotiations between the chartity organisation Gift of the Givers and al-Qaida.

Gaspard says US President Barack Obama authorised the mission because there was legitimate information that Somers was to be executed within 72 hours.

International Relations Department spokesman Nelson Kgwete says the minister spoke to her counterpart in Yemen at the weekend, strongly condemning the murder of the , reports EWN

“Minister Maite Nkoana-Mashabane expressed the South African government’s firm and unconditional condemnation of all forms of terrorism that invariably result in the senseless suffering and loss of innocent lives.”

“I am very saddened by Pierre’s death and my heart goes out to the family,” she said in a statement.

“He had a profound influence on my life and I will miss him.”

Korkie coached Ms Budd in 1988, at the height of her athletics career.

Olympic swimmer Ryk Neethling said Korkie had a great influence on him while he studied at Grey College in Bloemfontein.

Mr Neethling said the news of his death was devastating and he sent his condolences to the family.

“I spent a lot of time with him. He was one of the teachers I had the most interaction with at school,” Mr Neethling told Sapa in a telephone interview on Monday.

“He made a big impact in my life. You have a lot of teachers at school. He was always someone I remembered.”

“He was somebody that was firm. There was always discipline in his classes and he had a calmness about him,” said Mr Neethling.

“The respect he got was not a physical thing that he demanded, it was just the kind of reception he got. He was a real gentleman.”

In his monthly column, Monthly Word, in Gateway News, farmer evangelist Angus Buchan, writes that Pierre Korkie has finished his race and come home to his eternal destination. He says he believes that his untimely death will inspire many young people to go to the mission field for Jesus.

Yolande Korkie concludes the Korkie family statement with a message of thanks to God for the following “special people”: