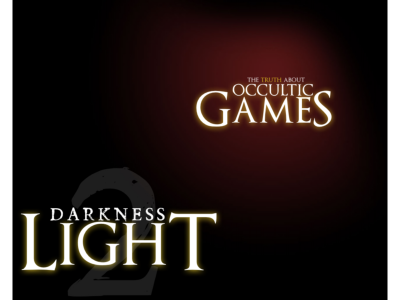 A wall fell over and kids became sick. These were only some of the occurrences at a Uitenhage school in the Eastern Cape recently, after some pupils played an apparent innocent game called ‘Charlie Charlie challenge’. The game has since been banned at the school.

The game however, is not as innocent as it appears to be, due to its occult nature.

To raise awareness of the dangers of this game and similar games, a free downloadable video called Darkness2Light, is now available on the website www.darkness2light.co.za . It can also be watched on YouTube: https://youtu.be/6zT_E96-KLg or DARKNESS2LIGHT THE DANGEROUS TRUTH ABOUT OCCULTIC GAMES (PRIMARY SCHOOL EPISODE).

The production of the video is part of the recent Switched On mission that took place in Port Elizabeth and is aimed at primary school children, parents, educators and as a tool for churches. A video for high schoolers and a more open-ended documentary is also in the making.

Darin Jonker, who compiled the Darkness2Light video, says:” I have been in ministry for years, starting with doing talks at schools concerning the dangers of the occult. Sadly, I have personal experience in these phenomena and was myself drawn into it as a teen through games like Charlie Charlie”.

The purpose of the video, he says, is two-fold, “Firstly, it exposes the darkness of the occult for what it really is, since it’s all about lies and covering up true design, intention and consequence. And then I want to have a reason to talk about my Jesus, my Saviour, the One who loved me even when I verbally rejected Him to engage in this occult business”.

According to him, the game, which involves two pencils indicating a ‘yes’ or a ‘no’ on a piece of paper, “does not end when the pencils are broken and the paper is burnt. This is what I want to educate people about,” he says.

“Satan is real. Thinking he does not exist works in his favour. Acknowledging his existence though, does not necessarily empower him. If managed responsibly, it can shine a light in the darkness and vaporize it. In fact, people need to understand that the minute the door to the supernatural realm has been opened, the player is no longer “doorman”. Once the door is open, untold damage can be done and often times it is not noticed because people assume satanic operation must look a certain way. This is where the greatest danger lies for me.”

Since leaving the occult practices, Jonker had deliberately avoided any contact with it, other than the occasional encounter through ministry where he was called in. He says he had forgotten what it felt like to brush shoulders with that side of the supernatural until the time he stood up to take the lead with the Darkness2Light video through the Switched On mission. He says there were “encounters” which clearly indicated they would be hitting a nerve.

Schools
“If the Citywide Church in Port Elizabeth was going to make a mark, we needed to stand with our schools who, at the close of the initial Switched On mission, immediately felt the backlash spiritually with the Charlie Charlie game hitting us. I can say this because this game is not new.  The timing of it coming to Port Elizabeth was anything but coincidental”, he says.

According to Jonker, the biggest problem in talking about these things, with parents in particular, is the blind eye people turn to issues of the occult. “Some claim their faith is so strong in Jesus they have no desire to talk about it and so shut it down, but this is not as noble a position as it seems,” he says.” Ignorance is not bliss. On the other hand, too many parents are not aware of what their children are involved in and so this opens the door to all kinds of opportunity for young people to make monumental mistakes”.

He also says there is a danger with parents who will readily tell you they played similar games in their past with no real lasting effect. “I worry about these people in particular because they may be aware of the serious nature of the game while thinking ‘I got through okay’”.

He says others may go to the opposite extreme, banning all kinds of activity and entertainment for their children.” In this case I fear we may push the investigative teen deeper into the dangerous zone. We need a balance; our goal with this mission is to educate people with a balanced view of the entire story, to provide resourcing, training and support for all groups of society”.

There is much speculation about the origins of the game, but with the rise of the Internet and the world being online, the spread has multiplied exponentially. “There are literally millions of views on YouTube of videos with people playing this game. I am currently in Kuwait in the Middle East and even in this censored society the kids have played this game,” he says.

“Teens are at a pivotal point in their journey into adulthood; as such they want to break free from the ‘kid’ stigma and want to prove their grit. They seek out opportunities to prove themselves. They want to experience and feel something serious. This is the main reason a game like this will remain popular. I would love to say that the more shocking stories surface, the less teens will play, but the reverse will be true. We need the Holy Spirit to work with us to bring this to an end through education and deliverance,” he says.

Being involved in online media design, Jonker says he would like to see the Dark2Light videos become a resource for homes, schools and churches for years to come.

He says: “We must know Jesus is the ultimate Supernatural power so to speak and we need to bow our knee to Him. When we responsibly stand in that position, we have no need to fear the darkness but again, not fearing does not mean not being informed about it. We need to know what we are dealing with if we want to win the war”.

Jonker’s personal experience
Remembering his time with the occult is still very difficult for him. “I don’t often talk about it. The whole point of these videos, since there will be more, is to show the long lasting effect of entanglement with these ‘dark arts’. In the primary video I mention two specific stories from my experience; the one was a lasting effect, namely a fear of the dark. Besides this there are other residual effects for me. I for example cannot watch movies of an occult nature. The pull in that direction is still too strong. Again I don’t often get into this because it gets too real. In the high school video and the open ended documentary film, which is coming under the same banner, I will explain more of my story,” he says.

To make the video was also not an easy process. “It was incredibly emotional to relive the past in this context. I had to talk to my wife and family about the fact that it would be viral within a couple of months. I had put my parents through a difficult time while I was involved in this, so I did feel the need to inform them too. My son, who is now 16, did not know about this part of my history, so I had to talk to him as well”.