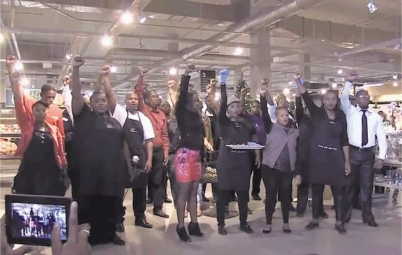 Woolworths has shrugged off recent protests about the Israeli products on its shelves.And the social media campaigns against the upmarket retailer, and the general nastiness in the media.

”It won’t change what we do,” said Susie Squire, Woolworths’ head of corporate affairs.

Woolies was not under siege, she said. The retailer would keep its messaging the same and try to be as transparent as possible, she said.

Woolies has been attracting plenty of attention, from claims about its organic milk not being all that organic to Palestinian pressure groups calling for boycotts.

Yesterday, there was a post on Twitter that a rat was seen in its Bryanpark store. Then all the old stories were dug up – like the battle over Frankie’s soft drinks, the row over an allegedly pinched hummingbird design last year and others.

”Well, after the organic milk thing, we went to one of our suppliers’ farms and made a video to show ‘this is an Ayrshire cow, this is how it lives’,” said Squire.

And Israel? The term ”blood tomatoes” has been bandied about.

“We are not a political party. We are a retailer.”

Squire said some campaign groups would use the Woolworths name to heighten their own profile.

Woolies is in many ways a target brand. Someone to piggyback off.

With social media, it has become more direct and quicker. Negativity can spread online like spilt milk on a supermarket floor.

”You do occasionally get trolls. Everyone has trolls. We are not going to please everyone all of the time.”

Most customers with whom Woolworths engaged on social media, Squire said, just wanted an answer to their queries.

”Those tomatoes are grown in the Cape. The ‘Israeli’ on the packaging in that instance refers to the type of tomato, not the origin.”

But, yes, Woolies has products on its shelves that have been sourced from Israel.

”South Africa doesn’t have sanctions against the country. We label it clearly and give the consumer the choice.”

Do not expect an advert that defends some sort of position on Israel. Or Woolies to take an apologetic approach to putting its brand out there.

”We’ve always had people stirring things up. It’s not something to be frightened of. We’re never aggressive. We’re open,” she said.