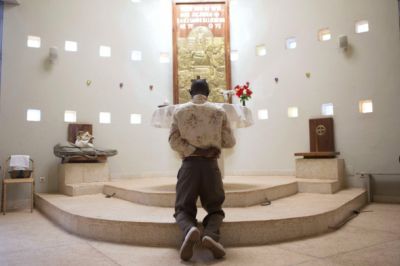 A Muslim extremist who tried to kill a Christian pastor last week in  Central Africam Republic has now accepted Jesus Christ as his Lord and Savior, according to a global missionary network.

Bibles for Mideast, a group of missionaries that delivers Bibles to underground house churches in the Middle East and Africa, has reported that Ibn Yakoobi was among the extremists who attacked worshipers at an Assembly of Loving God church in a CAR last Wednesday.

In a report published to its website on Monday, the organisation explained that Yakoobi even tried to kill the congregation’s pastor, Musthafa, with his sword. However, the organization claims that Yakoobi witnessed a miracle, as an angel allegedly pulled Musthafa to safety.

Also according to the report, worshiping Christians were kept dry by a miraculous cloud while rain and hailstones fell on the persecutors after the roof of the church had been destroyed.

Although Yakoobi was a devout Muslim, he and others couldn’t deny the supernatural events that had occurred that day.

“While Yakoobi remained full of questions, many in the neighborhood were softening in their attitudes towards Pastor Musthafa and the assembly, all former Muslims. Some, mostly women from neighboring houses, had begun joining them for their prayer services over the next two days,” the report reads. “But the Imam of the mosque and other religious leaders became only angrier with the new developments.

On Friday, the local imam told the worshipers at his mosque that they were forbidden from believing the Christians and attending their prayer meetings. The imam reasoned that the Christians were no better than the black magicians and their magic destroyed by Moses.

After the imam warned his mosque about going to pray with the Christians, Yakoobi stood up to ask a question, knowing that sharia law forbids the asking of questions during a sermon.

Why then, imam, can’t you do miracles as Prophet Moses did and destroy their black magic?” Yakoobi asked. “If you can’t, don’t talk about it!”

Yakoobi’s comment angered the imam, who ordered Yakoobi to leave the mosque. He was escorted out by other mosque leaders.

Bibles for Mideast reports that Yakoobi was beaten mercilessly and dragged into an open drainage ditch.

Yakoobi was severely injured and suffered numerous broken bones, the report states. After all the mosque attendees walked right by Yakoobi’s broken body without a care for his well-being, the report claims that Yakoobi saw a strange cloud shadow over him. It was much like the same cloud he saw days earlier that had shadowed over and protected the Christians.

“He then saw a bright and mighty man in the cloud, sitting on a throne. That man showed his hands to Jakoobi, and they were nail-scarred,” the report claims. “He could also see blood-stained marks on his legs, and on the side of his chest.”

After “blood-colored” rays beamed down from the cloud onto Yakoobi, he realized that the man was Jesus Christ.

“I was brutally beaten, wounded, crucified and died on the cross of Calvary,” Yakoobi recalls Jesus telling him. “After death, they pierced my side with a spear. But I rose from the dead. You are healed by my wounds. You are purified by my blood. You have salvation by my death. And you have eternal life by my resurrection. Now I give you a new heart and new life. Be faithful.”

After that moment, Yakoobi was reportedly healed. He then bowed down and told Jesus, “I believe in you Lord Jesus. You alone are my Lord and my Saviour.”

After the cloud vanished, Yakoobi went home and shared his experience with friends and family.

Some extremists who were also involved in the attack on the church and witnessed the miracle protection of the Christians also put their faith in Christ after Yakoobi shared his testimony, Bibles for Mideast reports.

After having caused so much damage to the church, the group went last Saturday to the church to help rebuild its roof and ask for forgiveness. They later joined in the church prayer service, which consisted of over 200 people.

In response to the news that Yakoobi and other Muslims converted to Christianity, according to the report, the local imam has allegedly vowed to retaliate and fight the “Christian scourge.”

“Our Lord Jesus does not want us to fight against our enemies in a physical way,” Pastor Paul, director of Bibles for Mideast, said in a statement. “His will is that we war against Satan and his people with our fasting and prayers. Our Lord said ‘this kind does not come out except by prayer and fasting.’ Also God says in the book of Ezekiel that He has no pleasure in the death of the wicked; but that the wicked turn from his way and live. So pray for the people who are trying to persecute you. The Lord can change them by your prayers. Be courageous. The whole church and the children of God around the globe are praying for you.”