I got to know Pastor Thobile Sonjica when he was serving at Bluewater Community Church. I am not sure of the exact year I first met him. I cannot forget that he had two outstanding character features: humility and a desire to see others impacted by the Gospel.

I remember he led the sports outreach ministry for Nelson Mandela Bay during South Africa’s 2010 FIFA world cup. He was the most suitable candidate for this, as he always was drawn to young boys and saw sports as a powerful instrument for moulding their lives.

He had a particular desire to address the problem of fatherlessness, perhaps drawing from his personal experience of growing up without a father. With his children, Thobeka, Joshua and Lonwabo, it was as if Thobile was overcompensating. Their close-knit bond was something the Sonjica family was renowned for. As a family, with his wife Linda, they formed a band and ministered the Gospel together. Thobile played different musical instruments and held workshops with various churches around worship. They also led worship during citywide worship events.

Not only was his family musically talented, but they also had a rapport that is rare today. I think the secret and glue was Thoble’s ability to relate well with people much younger than him. He respected people, regardless of their social standing. His ability to bridge the generational gap was important in a country where less than 35% of African children are raised by their fathers. The movement “The World Needs A Movement”, declares itself to be “committed to building unbreakable and unhealthy communities”. Thobile was involved with this movement and its work.

Not only was Thobile committed to the mending of broken families, but he was also committed to racial reconciliation. Since his early days with Lion Life Ministries in the mid-eighties, he has always worked across the racial and culture line. During this time of turmoil and unrest in South Africa, Thobile was in the company of groups who would otherwise be found on different sides of the political fence.

He believed in the Gospel’s preeminence and power to address social and political issues. To him, the Gospel also transcended one’s culture. This is why he and others started one of the first evangelical churches in Port Elizabeth townships. This church, known as Way of Life, was started in Zwide, and to launch it, it meant Thobile and his group had to go the opposite way of entrenched family and societal traditions and beliefs.

I heard him share this part of his life, and with humour he allowed us to see the hurdles they had to jump over. This pioneering spirit carried on with Thobile as he became part of many initiatives in Port Elizabeth. His enduring legacy for PE is the Nehemiah Prayer Walk that he helped to organise with Transformation Christian Network (TCN). The walk took 6 months of planning where TCN founder, Trevor Jennings and Thobile drove throughout the metro mapping the route. Thobile was able to direct the organisers to strategic points where prayer and repentance need to be made. The walk, which was led by retired Port Elizabeth Anglican Bishop Eric Pike, covered 200km, and Thobile was there to marshall and lead the prayers walkers.

The last time I saw Thobile was three weeks before his death. We had coffee at Fountain Vineyard Christian Fellowship with a core group of relating city pastors. When we were leaving, we both spent some time in the foyer chatting. I shared with him about my transition from the pastoral ministry. He listened and offered a word of encouragement. He was never intimidated or envious of what God was doing in the lives of others. As a sports person, he understood that the success of the individual is the success of the team. What a team player!

Below is a short tribute to Thobile from former Bishop Eric Pike:

Passed Away on 27th June

Many walked the Nehemiah Prayer Walk but there was only one leader and that was you my dear brother Thobile.

It was you, my brother, who insisted on being our Marshall on the days we were to walk and pray our way through dangerous and troubled areas.

It was you, my brother, who supervised the handing-over ceremony of the reflective bib and flag to the Marshalls at the start of each day.

It was you, my brother, who explained to the Marshalls, that in putting on the reflective bib they were clothing themselves with the whole armour of God, and that in taking the red triangular flag they were taking the victory won through the blood of Christ into every corner of the Metro.

It was you, my brother, who walked beside the Marshalls when they were unsure of the way.

In every way you, my brother, were our leader and it is you who has now led us on the way that we all must all go,

into the Eternal City of God. 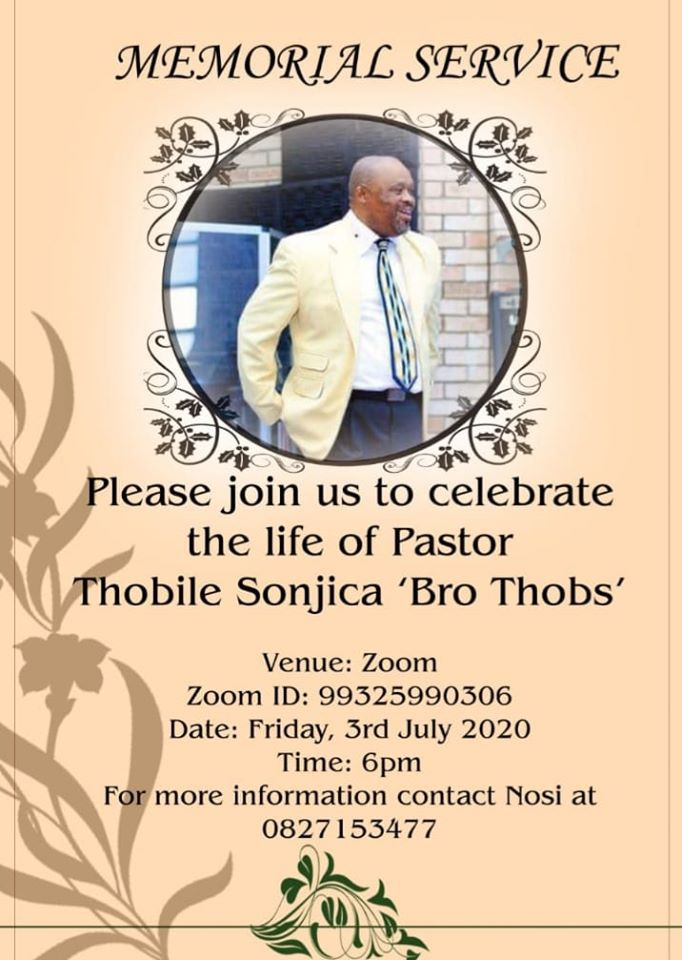